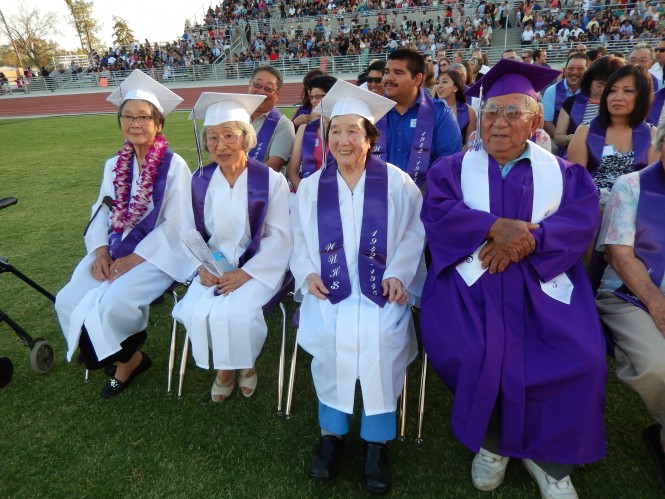 Fresno, Calif. — One of life’s greatest moments is receiving a high school diploma, a moment that signifies the beginning of one’s future. For Nisei students attending high school at the start of World War II, that moment was taken from them when they were forcibly removed from their homes and taken to live in various internment camps. Although these students might have received their diploma in camp, they didn’t receive it from the schools they attended.

On June 6, Washington Union, a rural high school district at the southwest border of the Fresno, Calif., city limits, paid tribute to those Nisei students that attended the school from 1942-45 by awarding them honorary high school diplomas.

Fifty Nisei students were found in the 1942 yearbook, and representatives for 44 out of the 50 Nisei students were contacted. Six living Nisei attended the graduation ceremony, with 21 confirmed family members also attending as stand-ins for the Nisei honorees unable to attend.

The recognition was made possible through the California Nisei High School Diploma Project, along with the generous support of the Washington Union High School administration and staff, in particular Principal Derek Cruz.

In 2004, AB781 (Leiber) was passed mandating that all high school districts provide honorary retroactive diplomas to Nisei were were not awarded their diplomas in ceremonies with their classmates as a result of their forced removal and incarceration during World War II.

The Japanese Cultural and Community Center of Northern California led a statewide outreach and educational campaign for AB781 where more than 1,200 Nisei were located and given an opportunity to receive diplomas.

As a result, belated honorary diploma presentations have been made all over California, rewarding more than 500 diplomas to Nisei or their families.

In 2009, AB 37 was passed and implemented by the California Nisei College Diploma Project to do the same for Nisei attending colleges and universities.