In observance of President Franklin D. Roosevelt’s Executive Order 9066 on Feb. 19, 1942, a candlelight vigil was held at the Watsonville City plaza to commemorate the 75th anniversary of the infamous order. 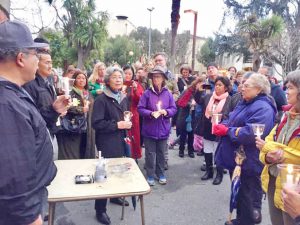 The event, organized by Watsonville Mayor Oscar Rios and Sayo Fujioka along with co-sponsor Watsonville-Santa Cruz JACL, drew more than 135 attendees, three-quarters of whom were non-Nikkei.

Hashimoto stated he was grateful to the 9th Circuit Court of Appeals’ most recent ruling reversing the current administration’s executive order banning the entry of Muslims from seven countries into the U.S. He recalled that during World War II, the Nikkei nation had so little public and private support. Only the Quakers supported the more than 120,000 individuals of Japanese ancestry that were unjustly incarcerated. He then expressed his gratification that those being targeted today are receiving worldwide support.

Chief Honda, a Sansei whose parents and grandparents lived in Oahu, spoke of his family’s experience and that of the Japanese and Japanese Americans in Hawaii on Dec. 7, 1941, and thereafter. Of the 158,000 Nikkei in Hawaii, nearly 2,000 leaders were arrested and imprisoned. Honda also spoke of Watsonville’s stand as a sanctuary city.

And Jenny Sarmiento spoke of the daily concerns and fears of the undocumented and documented immigrants, many of whom are from Latin American countries. She also thanked the City of Watsonville for its sanctuary stand.

The message shared by all in attendance was that the injustices that resulted due to E.O. 9066 must never be repeated.