Youth Perspective: Community, Collaboration and Justice for All

Why would Japanese Americans be punished for something they couldn’t control? What was life in “camp” like for them? What foods and flowers did they grow? How did they maintain traditions? How did they find hope in such unsure times?

I was raised to know this history and to seek justice and kindness. Recently, I participated in the University of Denver (DU)-sponsored archaeological dig at the Granada Relocation Center in Colorado, my grandfather’s former concentration camp. I was able to explore these questions with my classmates, some of whom were unaware of the mass incarceration of American citizens during World War II.

We also cleaned, identified and cataloged artifacts. In addition, we interviewed survivors for context as well as clues to structures and life. We had evening discussions on the history of Granada, also known as Amache; camp terminology; community engagement; garden archaeology; and its potential future as a National Historical Park. The hands-on instruction was accessible and relevant, and our research will lead to scholarly interpretation and dissemination.

I explored American history — my family’s history — in a tangible, perhaps once-in-a-lifetime way. To enhance my classmates’ understanding, I talked about my  lived experience as a Japanese American and Amache descendant.

My goal was to provide space for discernment and community building. I lived with and learned from my fellow diggers — people from all walks of life — from across the country and around the globe. My heritage influenced the study of my grandfather’s wartime home, and this research reinforced my commitment to the goal of justice for all.

Each student of the DU Amache Field School Project was asked to develop an outreach project. Although many children visit the museum with their families, the Amache Museum lacked an interactive activity targeting this age group.

I found it difficult to portray this dark part of our history to a younger audience. I wanted children to understand the obstacles faced by the incarcerees, but also the ways in which they made the best of their situations.

Therefore, I designed a booklet with Amache-related activities, including a crossword puzzle, word search, comic strip, origami directions and an image of an empty barrack with suggestions to beautify the structure, such as internees did with their barrack gardens during their incarceration.

Children’s concepts were also taken on by undergraduate students Kimberly Campuzano of Adelphi University and Maghan Monnig of the University of Missouri. Kimberly led origami-folding, while Maghan prepared a scavenger hunt. We gathered our rough drafts and contributed feedback.

I taught Kimberly how to fold a crane, and  I also suggested that Maghan include a  section on camp sports. She encouraged me to include a picture of a child at Amache on my booklet cover. Better results came about through collaboration.

In the near future, I would like to ask Anita Miyamoto Miller and Carlene Tanigoshi Tinker about their experiences growing up at Amache. Anita’s family lived in Cortez, Calif., before the war, while the Tanigoshi family hailed from Los Angeles.

The two have been volunteering at the site for each of the six digs that have taken place every other summer since 2008. I would also ask about their thoughts about Executive Order 9066, once they became aware of it, and how their perspectives might have changed over the years. Their insight can inspire ideas to further enlighten young people on the realities of this period.

During a museum session, I showed Anne Amati, a museum registrar with the university, how to make an origami crane. I noted that this was something I did while attending a Japantown after-school program. Growing up around other Japanese Americans allowed me to easily inherit such traditions. Anthropologists call this “intangible cultural heritage.”

Living expressions such as these provide communities a sense of identity and continuity. Going to Amache provided the setting for me to pass these customs and values on to others. Seeing Anne’s happiness upon successfully completing her crane was unexpectedly  rewarding. As small as this may be, it helps build a kindred society.

When the History Colorado group came to hear about our research, each survey group gave a tour of their block. I gave a short introduction to my focus block, 9E. I explained the effects that the block’s topography had on the prisoners’ privacy, and the reason for the lack of barrack foundation remaining today. I also engaged local residents, showing our excavation findings and archaeology techniques. Increased awareness may translate into expanded involvement. In addition, these guests might be more vested in the future of this National Historic Landmark.

As the program neared its completion, Amacheans and their families congregated to walk the grounds and observe our work,  as well as to meet others with ties to this place. I was fascinated to see how many people made the long trip. 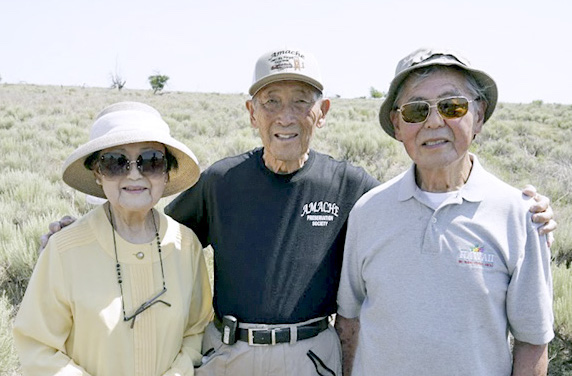 From left are Ikuko “Cookie” Takano Takeshita, Ken Kitajima and Mas Takano, who returned to their wartime home in Amache, Granada, Colo., on July 6 of this year. (Photo: Courtesy of Tomi Eijima)

Over dinner, I sat with Nisei Cookie  Takeshita and Mas Takano of Alameda, Calif., and Mas’s three children. Their enthusiasm to be present made me really appreciate this day. The Nisei recalled camp memories, while  I told field school stories. We drew connections to one another and found that we know many of the same people.

The community engagement aspect showed me how interconnected we all really are  despite different passions and backgrounds. The shameful and unjust evacuation brought all of us together and has allowed us to preserve something so significant to the early Japanese American generations.

Working with different groups brought life to my family history. Carrying out community archaeology not only added value to the studies, but also allowed others to cherish the moments with one another, as well as the exploration.

Furthermore, I gained a greater respect and appreciation for those who have endured discrimination and responded with dignity and resiliency. To the Issei and Nisei, I offer, Watashi no tameni anata ga shitekudasatta subete no koto ni kansha shimashita.  I appreciate everything you have done for me.

We are moved to take action, whether to protect history or to defend those who are scapegoated or otherwise marginalized, so that we don’t commit the same  mistakes. Understanding one’s own history and  culture improves cross-cultural competence and  global perspective and hopefully will lead us to Dr. Martin Luther King Jr.’s dream of  “an oasis of freedom and justice.”

Tomi Eijima is a senior at Lowell High School in San Francisco and a youth  member of the San Francisco JACL. Her grandfather, Frank Suzuki, and his family  lived in block 9H7B at Amache. Frank and his wife, Marion, are members of the Livingston-Merced chapter of the JACL. 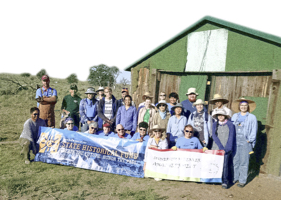 The University of Denver Amache field crew in front of the recreation hall of Block 11F in July 2018. This structure was returned to its original site in Amache in May after serving for 72 years as a utility building in the nearby town of Granada, Colo. (Photo: Courtesy of Tomi Eijima)