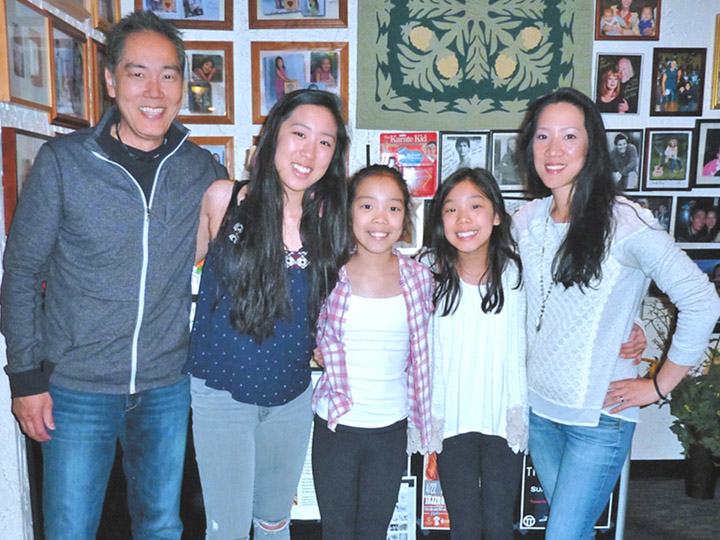 In 2002, Hollywood’s animated feature “Lilo & Stitch” taught the rest of the world the meaning of ohana, the Hawaiian word for “family.” Also in 2002, Hollywood-born actor Yuji Okumoto took the word ohana to heart in September of that year when he opened Kona Kitchen in Seattle, Wash.

It was an endeavor he readily admits he could not have accomplished without help from his own ohana: his “calabash uncle” Colin Hara, as well as his mother-in-law, Elizabeth Mar, who had restaurant experience in Bremerton, Wash., plus his wife, Angie, a former CPA at a big-name accounting firm.

Without their help, Okumoto’s “bright idea to open a restaurant” might have resulted in egg on his face, not part of a Loco Moco order from the Kona Kitchen’s popular breakfast menu.

After marrying Angie and relocating to Seattle in the early 2000s, the idea of running a restaurant seemed appealing to Okumoto; his years in show business had left him feeling a bit burned out. “I kind of needed a change,” he said.

According Okumoto, who was recently in his hometown of Los Angeles from Seattle on a short visit to see his parents, Yoshiharu and Yemiko Okumoto, he had worked in a Japanese restaurant as a host. Not only that, he had played a cook on TV. So, his thinking at the time was, “How hard can it be, right?”

“I convinced my uncle, who had a catering business for many years in Hawaii, to come help us out to help with the menu and recipes,” Okumoto said. “My mother-in-law, who owned a Chinese restaurant — she decided she would help us. She sold her stake in the Chinese restaurant to help us in Seattle with Kona Kitchen.”

Even Angie decided to quit her “great job” to help. “The three of us decided to open this restaurant, which at the time I thought was a great idea. It’s wonderful that it’s family owned, the three of us together,” Okumoto said. Of the trio, though, it was Okumoto who had the least amount of experience in restaurants.

“When you think about how many restaurants close in the first year, it’s staggering,” Okumoto said. “They say ignorance is bliss. In my case, ignorance was simply ignorance, not knowing how hard it is.”

Almost 15 years later, he can look back and laugh. “Boy, was I wrong!” Okumoto, it turns out, had a lot to learn.

“I never worked in a commercial kitchen before in my life,” Okumoto said. “I had to learn everything.

I learned how the ordering process went, I learned prepping, I cooked on the line.” After his uncle returned to Hawaii, there was no safety net.

Learning how to do everything was a necessity for Okumoto because in the restaurant trade, every day is a challenge, like when a cook calls in sick — or just up and quits to take another job, something that actually happened.

“One time, I think I was pulling in 90 hours a week,” he recalled. “That was really tough. But you have to kind of push through that and hopefully see the light at the end of the tunnel.

“My parents taught me, you never quit,” Okumoto continued. “You never, ever quit. My mother-in-law and my wife, too, they come from that same mentality. You don’t quit, ever.”

It turns out, however, that the star of “The Karate Kid: Part 2,” “Johnny Tsunami,” “Awesome Asian Bad Guys” and “Seppuku” was up for the challenge of facing obstacles and figuring out ways to surmount them.

“I think that’s what I liked about it, too,” he said, with regard to the challenges of operating a restaurant. In a way, it also fits in with what he’s also doing these days as he juggles running a restaurant while also continuing his show business career, now more as a producer than as an actor.

Okumoto learned about work from his father, who immigrated from Japan after World War II to the U.S, where he met and married his wife, a Nisei. It turns out that his father had spent some time in the restaurant biz as a short-order cook in Los Angeles before becoming a gardener.

“I remember waking up at 6 a.m. and climbing into his truck, half asleep, with my older brother. The two of us would go on his gardening route and help him.

I must have been 7 or 8. Raking leaves. Watering. Whatever. So, I did that for years. When I was 14, I had my own gardening route that I would do in the neighborhood. It was just what you did,” Okumoto said. “You have to make your own path.

In the long run, you go out there, do the work and be proactive.” 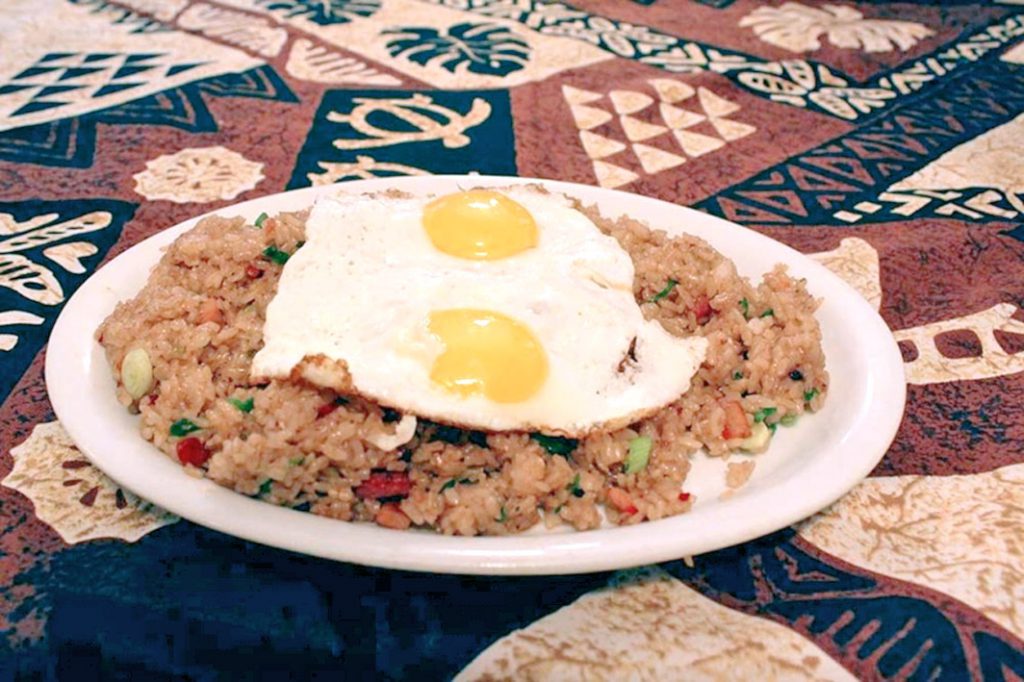 At Kona Kitchen, breakfast on the weekends are the busiest times. But Friday and Saturday nights are busy, too, with the bar open and karaoke mics on until 2 a.m. Okumoto says the restaurant’s most popular dishes are the Kalua Pig and Cabbage, the Korean Chicken, the Katsu Fried Rice Loco, the Mochiko Chicken and the Kimchi Fried Rice.

With Kona Kitchen now a well-established, well-regarded restaurant — especially with University of Washington students from Hawaii craving “homestyle grinds” — Okumoto says he and Angie are contemplating opening a second restaurant somewhere in Seattle.

Also, their three daughters, Mari (15), Keilee (11) and Emi (10) are now big kids and more independent, giving Okumoto more of an opportunity to pursue something he says restaurant work prepared him for: producing movies.

With restaurants, Okumoto explains, you’re always, figuratively speaking, “putting out fires,” solving problems and overcoming whatever obstacles the day throws at you. Movie producing is the same thing.

“I just completed shooting a feature film in Seattle called ‘Ultra Low,’ ” Okumoto said, and one of its stars is Lauren Holly, from TV’s “NCIS” and “Motive,” not to mention the feature film “Dragon: The Bruce Lee Story.”

His next project is “The Paper Tigers,” which he described as a kung-fu comedy. “That’s the next film that I’m producing, and hopefully, it’ll start production sometime in the summer.”

Still, for Okumoto, it comes back to family, to ohana.

That’s something everyone from Lilo to Stitch to “Mr. Miyagi” could all agree on. 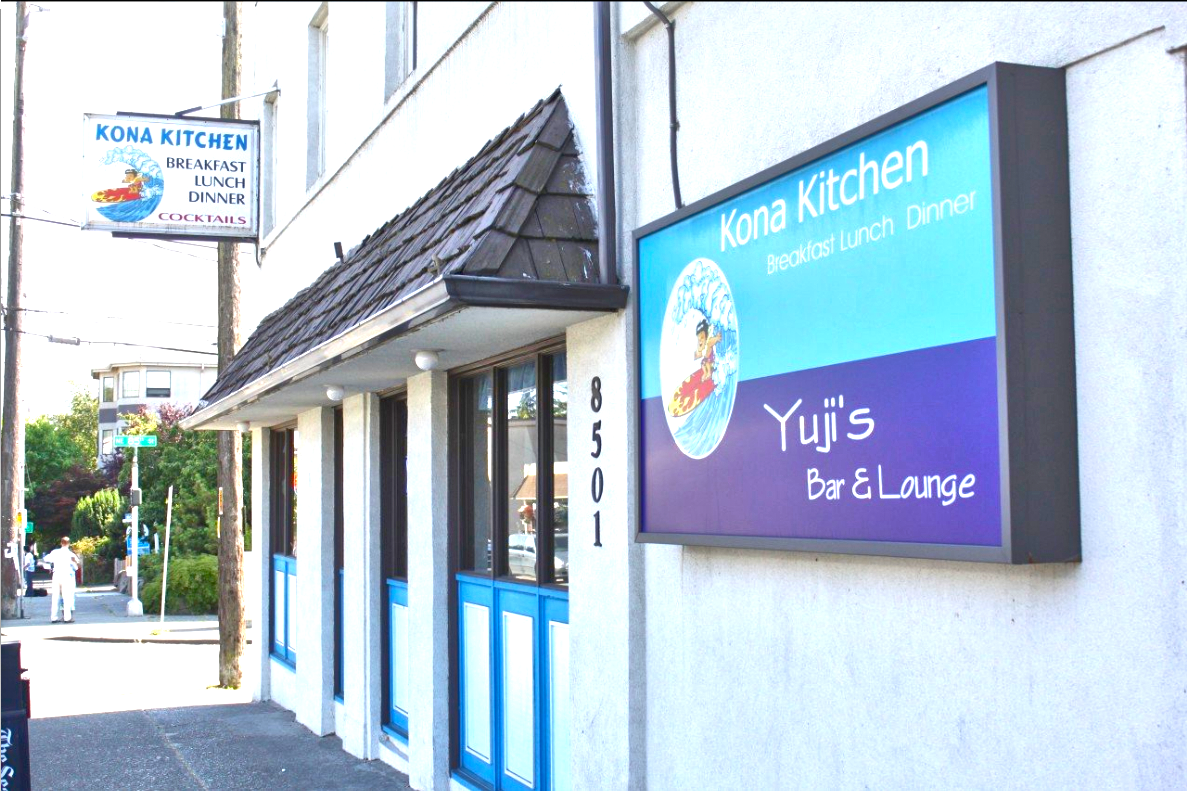