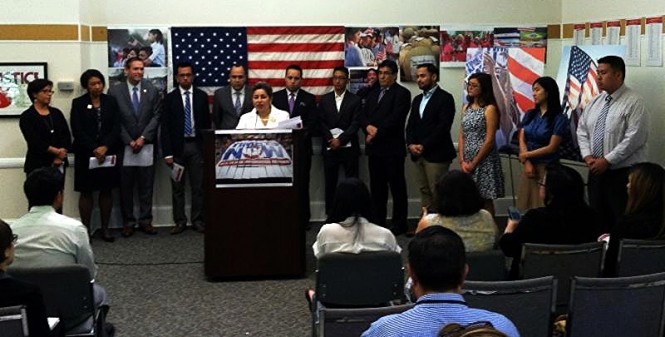 JACL joins with other APPI and Latino groups to release the 2014 National Immigration Score Card.

Washington, D.C. — On July 28, the Japanese American Citizens League participated in a press conference of Asian American/Pacific Islander, Latino and faith leaders for the official release of the 2014 National Immigration Score Card.

The score card, created by JACL and nine other national Latino and AAPI civil rights and advocacy groups, gives all 435 members of the U.S. House of Representatives an individualized “grade” to show the extent to which they endorse or reject immigrant-friendly comprehensive immigration reform.

The scores were tabulated based on nine legislation-based and two statement-based actions, which include: co-sponsorship of bills such as H.R. 15, its discharge petition, and the Reuniting Families Act; votes on amendments concerning immigration reform; and public statements on family reunification through visa reform, as well as the creation of a “pathway to citizenship” for immigrants already in the United States.

An overall score card, showing the percentage grades of each member of Congress, is available online at www.immigrationscores.com, alongside score cards for each state that show for each member the vote tallies from which the member’s percentage grade was calculated. Vote descriptions and vote keys, describing each bill and how it was used to score each member, will also be available. The score card will be translated into eight languages other than English, including Spanish, traditional Chinese, Tagalog, Korean, Vietnamese, and Hindi.

In a joint statement, JACL, OCA, NAKASEC, APALA, Voto Latino, NCLR, LCLAA, Mi Familia Vota, Hispanic Federation and LULAC announced, “The 2014 National Immigration Score Card leaves no doubt who supported immigration reform and who worked against us. The American people support immigration reform, and they will join us in sending a clear and unmistakable signal to Washington: Congress’ inaction fuels our action. The time is now for our communities to get engaged.”