A Legacy Intersects With Present, Future

With the start of Asian American and Pacific Islander Heritage Month still fresh, a civil rights fighter for all was remembered on May 4 in Little Tokyo when Rose Ochi Square — the intersection of San Pedro and E. First streets — was dedicated. 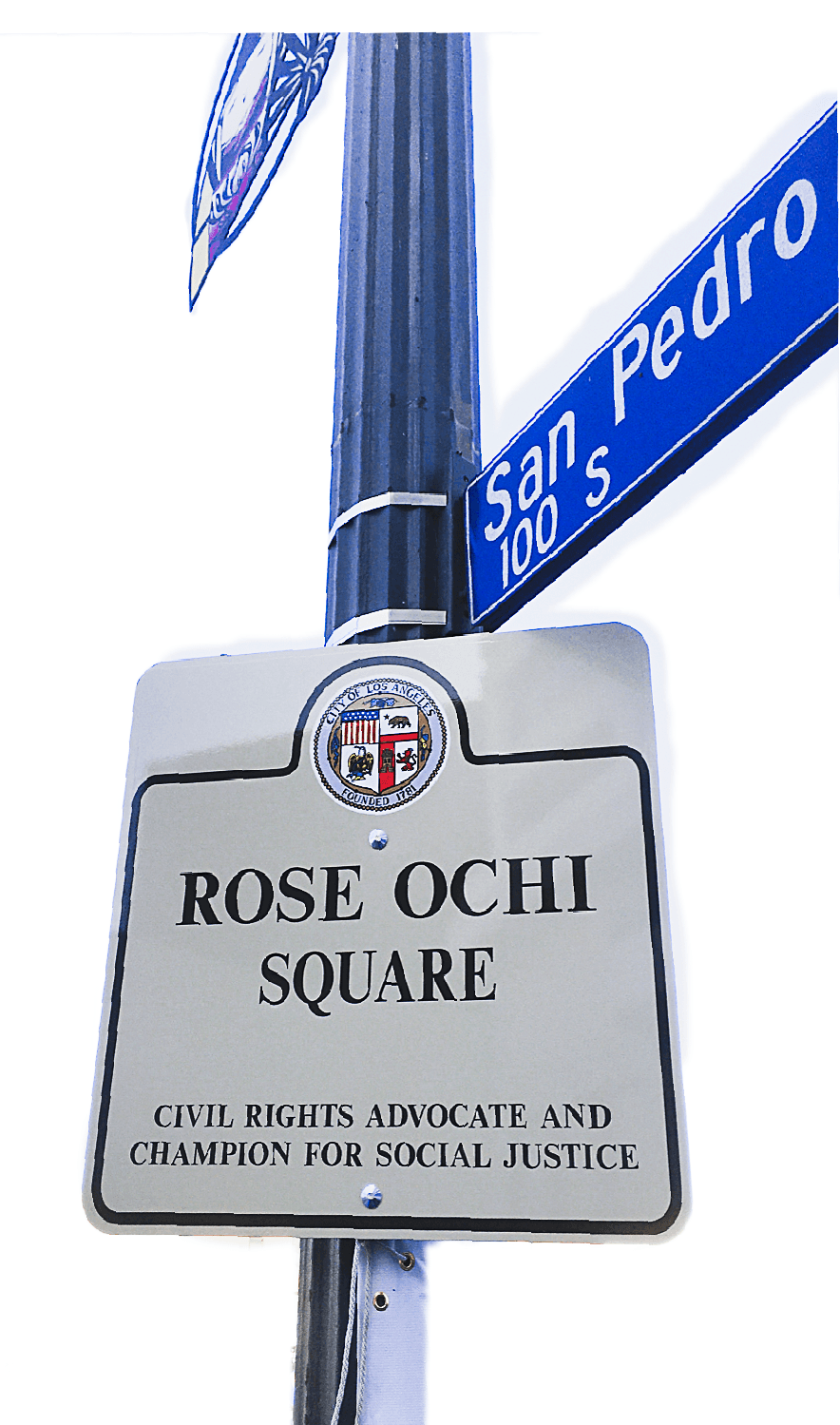 The sign designating the intersection of Little Tokyo’s San Pedro and E. First streets as Rose Ochi Square was unveiled. Similar signs are to be installed on the remaining corners in the near future. (Photo: Pacific Citizen)

Born Takayo Matsui in 1938, she spent her early years not far from Rose Ochi Square on the other side of the Los Angeles River in the East Los Angeles neighborhood of Boyle Heights.

Her first name “Rose,” however, was acquired during World War II by a teacher after her Japanese American family and she were uprooted and incarcerated at the Rohwer War Relocation Center in Arkansas. “Ochi” was added after her marriage to Thomas Ochi, who was present at the dedication.

“Her legacy is embedded in the history of our city, as well as our state and our nation,” said Councilman de Leon, who said Ochi’s early experiences, including having her mouth washed out with soap for speaking Japanese in school, molded her into becoming a fighter and activist. 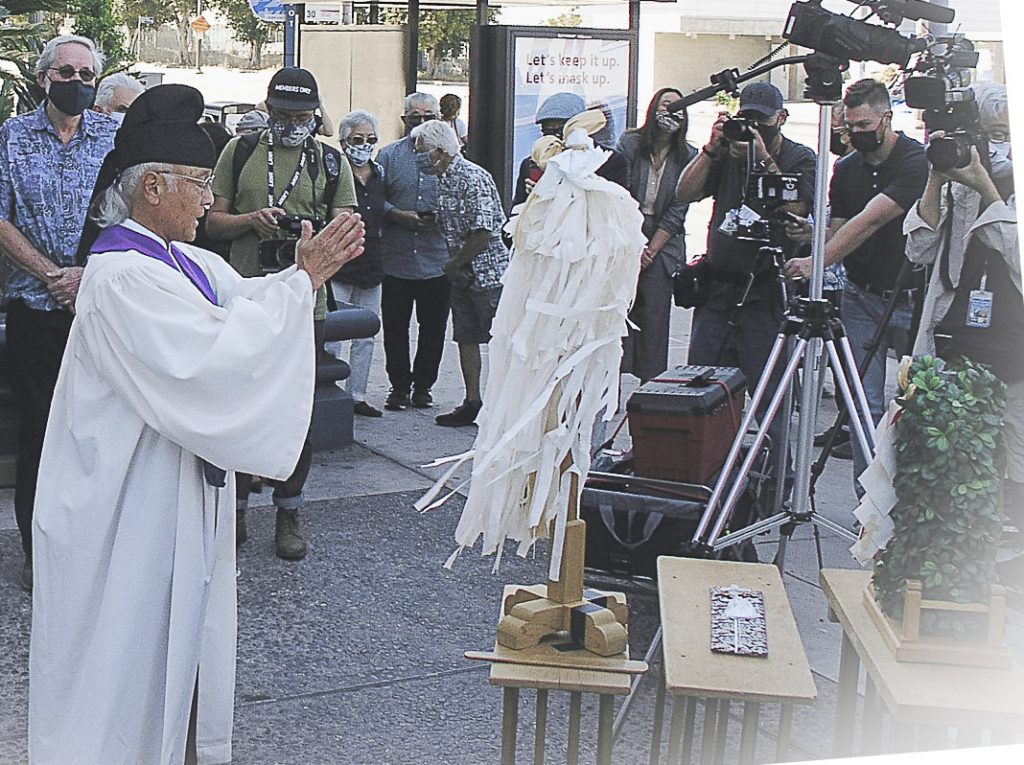 As an adult, she would use higher education and a law degree to participate in the political system and undertake a host of tasks, serving at the municipal, state and national levels and pushing to make the site of California’s Manzanar WRA Center into the Manzanar National Historic Site “so that no American would ever forget what happened,” de Leon said.

Ochi was also active in the nonprofit space, serving, among many other organizations, on the board of trustees of the L.A. County Bar Assn., being a founding member of the Japanese American Bar Assn. and participating in JACL at the national level, including an unsuccessful bid to become JACL’s first woman president in 1986, an election that was decided by two votes.

“Rose, Rosa, Ochi led a remarkable life, a life of distinction, of honor and grace, of dignity and of elegance. Our nation is better for her sacrifices and her contributions and the City of Angels is proud to call her a cherished daughter,” de Leon said, who then introduced another speaker, Darlene Kuba, who was one of the many younger people mentored over the years by Ochi. 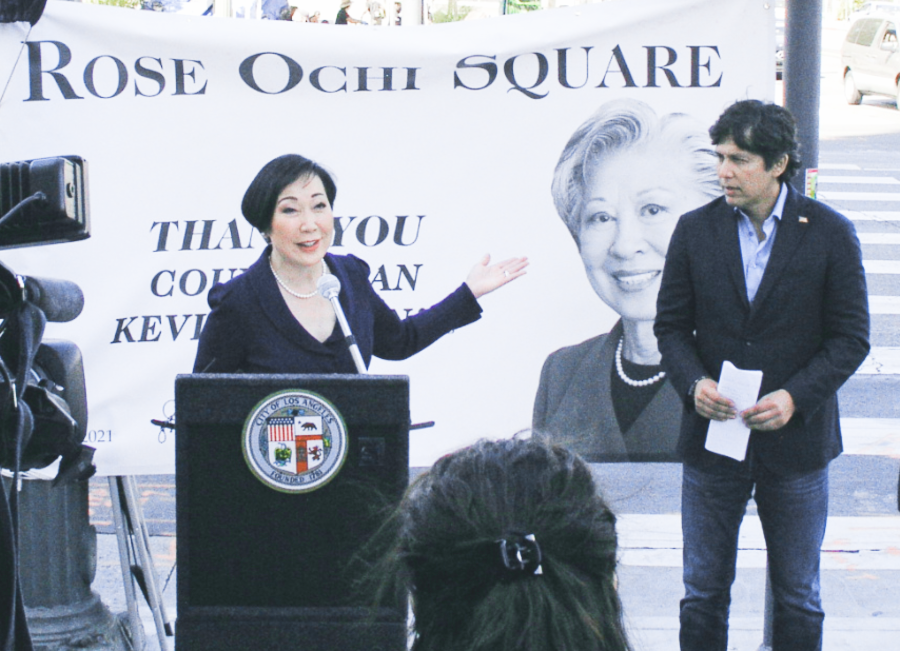 “Today, we honor the accomplishments and contributions of a remarkable woman. Rose’s entire life was dedicated to ensuring equity and justice for all,” Kuba said. “She was a true example of how one person can make a difference.”

The next speaker received laughs from the crowd when he said, “Hi. I’m Tommy Ochi, frequently introduced as Mr. Rose Ochi. After 57 years of marriage, I think I know Rose very well. She would be surprised and extremely grateful for this honor. She never sought to have her accomplishments publicized. In fact, I read an article on redress that stated, ‘No one would know of her contributions since she never talked about it.’”

The trio of de Leon, Kuba and Tommy Ochi then proceeded to remove the cloth that covered the new Rose Ochi Square sign, the first of four that will adorn each corner of the intersection.

Afterward, asked by the Pacific Citizen what his late wife would have said were she alive to receive such an honor, Tommy Ochi laughingly replied, “She’d probably say, ‘You’ve got to be kidding!’” He reiterated how she didn’t like to talk about what she accomplished. “She liked to just do stuff.” 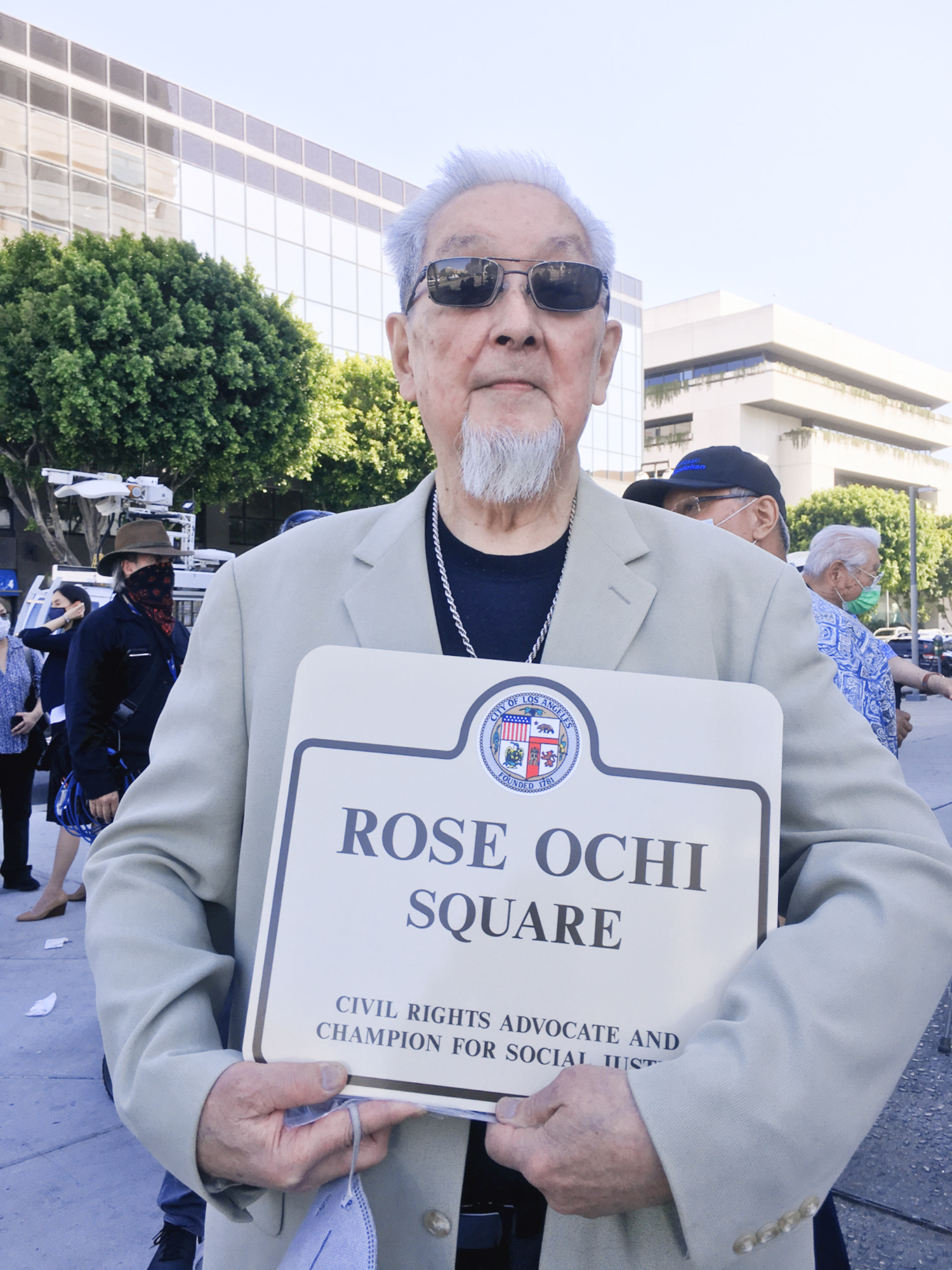 Thomas Ochi holds a smaller version of the sign that will mark an intersection of Little Tokyo as Rose Ochi Square. (Photo: Pacific Citizen)