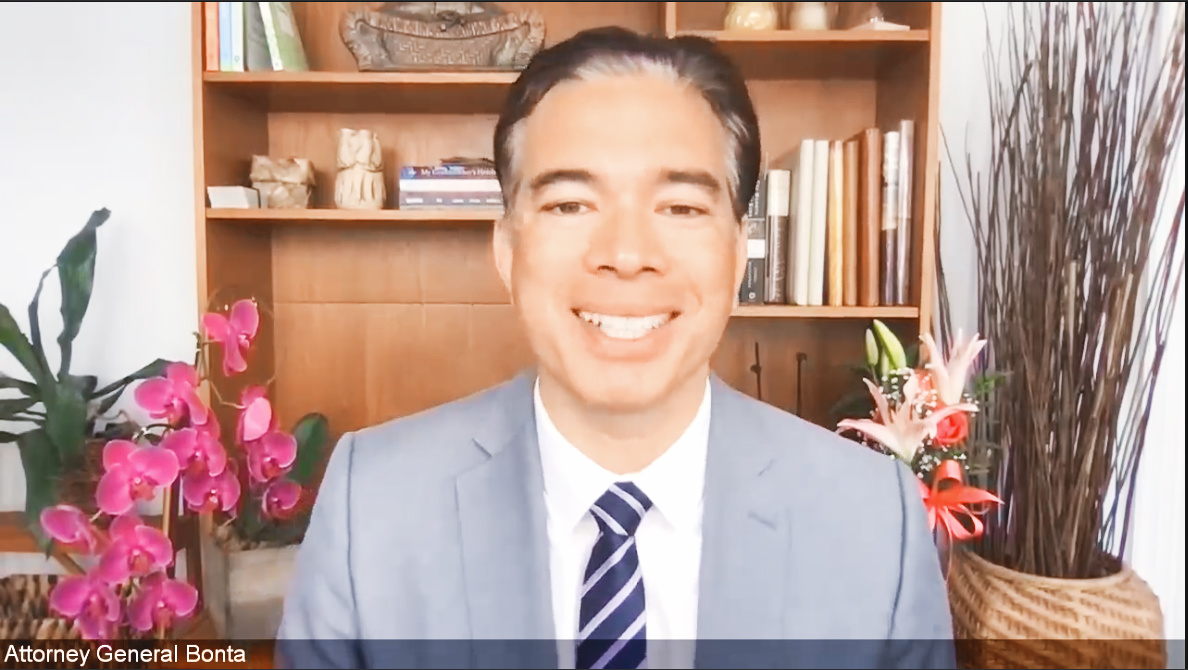 California Attorney General Rob Bonta unveils the formation of the Racial Justice Bureau on May 11 in a Zoom news conference .

Rob Bonta unveils an initiative to stem the rise in hate crimes at his first news conference.

In response to the alarming rise in hate crimes nationally and within California in 2020 and 2021, especially those targeting people of Asian and Pacific Islander descent, California Attorney General Rob Bonta, 48, announced the formation of the Racial Justice Bureau, which will be under the state’s Department of Justice.

The former assemblyman made the announcement on May 11 in a virtual news conference, his first since being confirmed on April 22 as the state’s attorney general, succeeding former state Attorney General Xavier Becerra, who left the post to join the Biden administration as the secretary of Health and Human Services.

“Specifically, the Racial Justice Bureau will initially bring six new attorneys and a supervising deputy attorney general on top of that to our Civil Rights Enforcement Section,” Bonta said. He added that the new attorneys are part of the first steps the state DOJ will be taking to address new and ongoing matters “through the lens of racial justice, through the lens of social justice.”

Bonta also noted that the California Department of Justice is actively looking to hire and fill the six attorney positions. “If you want to join a dynamic team, stand up for the people, our values and our incredible resources here in California, come join us,” he said, by visiting www.oag.ca.gov/careers.

When Bonta began fielding questions from news organizations, the Pacific Citizen asked how the state could deal with the root causes of racism, noting that the proposals to deal with this most-recent rise in incidents of anti-Asian violence, while commendable, were symptoms of a decades-old problem of racism.

“That’s a really important question,” Bonta responded. “A lot of people are focused on the now. How do we protect our beloved elders, who during their activities of daily living are being attacked, are being pushed down and punched in the face, slashed across the face and killed? That is a very important question to identify that immediate nexus, that current state of emergency and to prevent, support, heal, be victim-centered in approaches and do everything we can to stop the immediate crisis.

“But that also builds right into a broader discussion of root causes,” he continued. “The hate violence that we are seeing now is a symptom. It’s not a root cause. So, we need to do both. We need to walk and chew gum at the same time. We need to address root causes as we address the emergency that is immediate, that is right before us.”

Bonta said that was where a restorative justice approach could be used if, for example, a student who discriminated against another could be taught why his actions were wrong, especially if placed in a broader historical context that educates instead of merely punishes.

“Instead of an act of discrimination, maybe in the future you’ll see an act of unity or support. That helps build the next generation when we invest in our young people the same approaches that are restorative,” said Bonta, who also used the opportunity to decry messaging of the previous occupant of the White House, which he linked to the surge in anti-Asian violence.

“There is in the human condition at times an inclination to blame others and take it out on others. We need leaders who do the opposite, who push out messages of unity and solidarity and allyship, who celebrate and uplift our diversity instead of driving wedges between each other,” he said.

Bonta, as noted, was a state assemblyman who represented Alameda, Oakland and San Leandro. The Yale graduate is also the first Filipino American to serve as the most-populous state’s attorney general. In remarks made before the announcement of the formation of the Racial Justice Bureau, he noted that his parents, who “have been and are social justice champions, were leaders in some of the greatest social justice movements of our nation.”

“My mom (Cynthia Bonta) fought for the restoration of democracy in the Philippines, my father (Warren Bonta) marched in Selma, fighting for civil rights and voting rights, and they were both leaders in the farm workers movement.

“From a young age, I learned from them that, while they worked alongside Cesar Chavez, Dolores Huerta and Philip Vera Cruz and other incredible leaders, that, when something isn’t right, it’s time to fight, and that injustice against one is an injustice against all,” Bonta concluded.