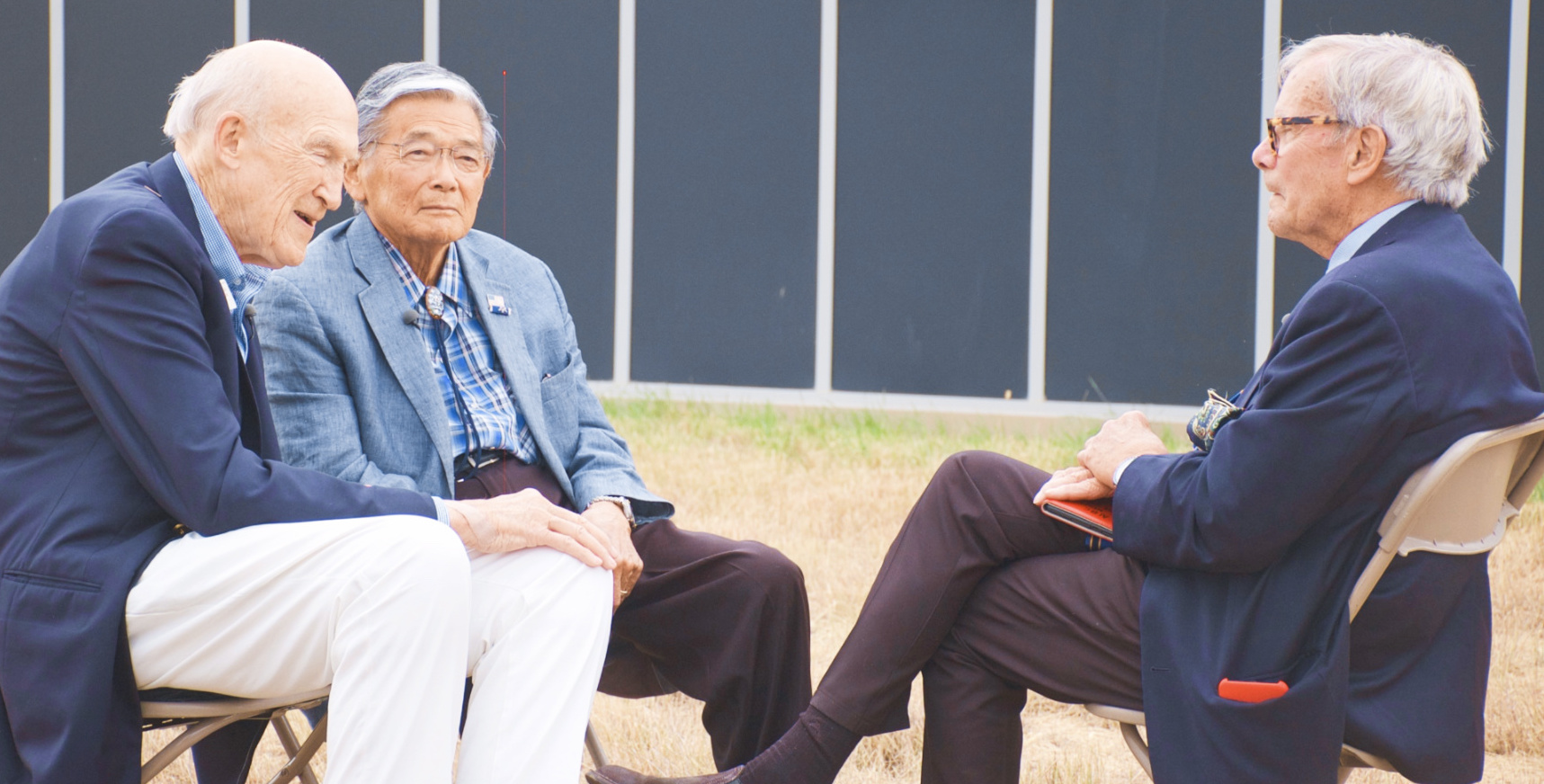 Race “is not in any fashion in America a measure of worthiness,” former NBC anchorman Tom Brokaw told attendees at the eighth annual Heart Mountain Pilgrimage on July 27. “We’re all the same.”

Zall is a Heart Mountain board member who lived as a child in nearby Ralston, Wyo., and watched the last train filled with Japanese American incarcerees leave the camp on Nov. 10, 1945.

In an at times tearful speech, Brokaw said Heart Mountain “was a concentration camp, nothing less,” as he waded into a debate that pervaded much of the three-day event that was located 14 miles north of Cody, Wyo.

A day earlier, former Cabinet Secretary Norman Mineta, a former Heart Mountain prisoner, and former Sen. Alan Simpson said they leaned away from using that term because of the sensitivity surrounding the Holocaust that killed 6 million Jews in what were also known as concentration camps.

That was one of the few differences between the three men, who appeared in a piece by Brokaw on MSNBC’s “Morning Joe” on July 30.

Dianne Fukami, the co-producer of a documentary about Mineta that showed Friday, also called Heart Mountain a concentration camp. “I didn’t want to go back to euphemisms” to explain what happened, she said.

Brokaw said the “race card” is played too often in American politics as a means to divide its citizens, which Mineta and Simpson echoed in their interview with Brokaw and their comments during a panel discussion on July 26.

Brokaw closed his speech with the story of former U.S. Rep. Sam Gibbons, a Florida Democrat who was a paratrooper who jumped behind German lines on D-Day on June 6, 1944. Brokaw quoted Gibbons, saying Gibbons didn’t care about the ethnicity of his fellow paratroopers, who could tell friend from foe by using a little brass clicker.

When they clicked back, Gibbons told Brokaw, “They didn’t say, ‘I’m an Italian American.’ … Those are the guys I’m going to fight with.”

Brokaw was introduced and presented the award by Heart Mountain Board Chair Shirley Ann Higuchi, who has a book about Heart Mountain and the incarceration that is set to be published in the spring. Brokaw wrote that book’s afterword.

Dignitaries and a Record Crowd

For the first time ever, the Japanese ambassador to the United States appeared at a pilgrimage. Ambassador Shinsuke Sugiyama told the attendees that every Japanese citizen needs to know about what happened to their friends and relatives in the United States during WWII.

“Heart Mountain is a place of moral significance,” Sugiyama said, adding that he first became interested in going to Heart Mountain after a visit to the Japanese American National Museum in Los Angeles. “I had to come here and see how you did it and got to redress.

“Back in Japan,” Sugiyama continued, “Japanese people need to know better what happened here. I am here to lead a course of understanding.”

Sugiyama’s appearance was the result of extensive work with the Japanese Embassy by Higuchi and other members of the foundation who met with diplomatic officials several times in Washington, D.C. The embassy also held an event for members of the Japanese American Confinement Sites Consortium in Washington, D.C., in February that spurred the invitation to the pilgrimage.

The pilgrimage drew a record crowd to events in Cody and at the Heart Mountain Interpretive Center. Higuchi recognized the more than 50 Nisei former incarcerees who appeared at this year’s event, with many saying they would return next year with their families.

In addition, there were multiple multigenerational panels in which former incarcerees and their families talked about the trauma that still remains from the incarceration. Many of the former prisoners resisted talking about it for years, even with their closest family members.

There was also footage shown of a documentary in progress called “Return to Foretop’s Father,” about Crow Nation elder Grant Bulltail, who participated in a panel discussion with documentarian Preston Randolph and University of Wyoming Professor Mary Keller.

The Crow, who were driven from the land in the 1880s, gave the mountain its name and also called it Foretop’s Father, Bulltail said. 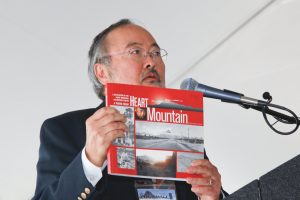 Honoree and former Los Angeles County Superior Court Judge Lance Ito holds up a book about the farms at Heart Mountain during his keynote speech. Ito praised the work done by Heart Mountain farmers during the war. His father, James, led the farming efforts at the camp, where he also met Toshi Nagamori, who would become his wife and Lance’s mother. (Photo: Marvin Inouye)

Those farmers were led by his father, James Ito, who used his skills developed at the University of California, Berkeley, to analyze the area’s soil and determine which crops could thrive when the farms finally received irrigation.

Ito showed a series of seven posters highlighting the work done by his father and the fellow farmers, who raised more than 1 million pounds of produce that they stored in a root cellar, which is currently being restored by the Heart Mountain Wyoming Foundation.

“You talk about organic farming,” Ito said. “They had to pick the bugs off the plants.”

Like Brokaw before him, Ito grew emotional when talking about his parents and their fellow incarcerees, many of whom lost everything when they were forced to leave their homes and businesses on the West Coast due to Executive Order 9066.

“My parents never talked about [the incarceration],” Ito said. “Every now and then, they would say, “I knew him in camp.’ Until I was in middle adulthood did I persuade my parents to tell me about it.”

Ito showed the audience a poster of his mother’s high school diploma, which was delivered to her at the Santa Anita Assembly Center by the principal of Los Angeles’ John Marshall High School. Toshi Nagamori Ito had to leave school six weeks before graduation because her family was forced from their home and into Santa Anita before the end of the school year.

Mineta appeared throughout the pilgrimage, starting with a morning screening on July 26 of the new documentary by Fukami and Debra Nakatomi that features him — “Norman Mineta and His Legacy: An American Story.”

The documentary, which has aired nationally on PBS, tells about Mineta’s journey as a child from San Jose, Calif., to Heart Mountain and then to the U.S. House and the Cabinet under Democratic President Bill Clinton and Republican President George W. Bush.

During the documentary and a panel discussion that followed afterward, Mineta said he cherishes the term “citizen” because he and his family were called “enemy non-aliens” at the beginning of World War II when they and 120,000 other Japanese Americans were incarcerated in the series of 10 camps run by the War Relocation Authority.

“I cherish the term ‘citizen’ because of our own government being unwilling to acknowledge us,” Mineta said. “That threat still exists. What’s our democracy all about?”

Simpson, who first met Mineta in 1943 when his Boy Scout troop from Cody traveled to Heart Mountain for a jamboree with the scouts behind barbed wire, said he has to “keep it light because [the incarceration] is heavy on the heart.”

He told the crowd to get a copy of the dissent in the 1944 Supreme Court decision Korematsu v. United States by Justice Frank Murphy.

“He used the word racism six times,” Simpson said, adding that Murphy called the incarceration a product of war hysteria and racism.