The National Board convenes in San Francisco to re-energize its efforts to show people why they should be a JACL member.

Action. It’s a term that the JACL has long been familiar with since its inception in 1929. Through the years, that terminology has been used to see the follow-through of great moments in the organization’s history — from civil rights advocacy to redress to supporting landmark court cases.

It’s a term that JACL still recognizes and fights for, clearly now more than ever, as the organization was all about “action” at its latest National Board meeting, conducted at its San Francisco headquarters from Oct. 21-22.

JACL convened to outline a “strategic plan” that opened up a broad discussion about the organization’s mission statement, its vision for the future and how to best ensure its sustainability in an ever-evolving world.

Chief among topics discussed were financial fundraising initiatives, membership goals and ways for all JACL chapters to work together along with the National Board to remain relevant.

“We have a lot of work to do with this organization to re-energize our grassroots network,” said Executive Director David Inoue. “One of my goals is that JACL is known for its political clout and its strength in that area. We are the only Asian American group that has chapter membership across the country. … That’s something I really want to work on to get our chapters and members engaged in this process.”

And it is paying off. Inoue noted that JACL chapters have been working closely together on many important social issues, including grassroots advocacy on the DACA/Dream Act, the Tule Lake Fence Proposal and writing letters to support Fred T. Korematsu Day in New York City in 2018.

“We’re all in this for the same reason,” he said. “We love this organization and want it to move forward. We just need to figure out the best way on how to do that.”

As part of the organization’s strategic plan, JACL is working on a fundraising campaign to raise $1 million, as National Secretary-Treasurer Alan Nishi outlined during his report that although the organization’s YTD revenue (as of July 31) exceeds the budget by $217,000, fundraising revenue is still $49,000 below the forecasted amount, the P.C. is $44,000 less than budgeted, grants are $30,000 below budget and membership revenue was $11,000 less than budgeted.

Nishi noted that a general donation of $100,000 and bequest of $90,000, as well as high-performing investment income due to strong market conditions largely accounted for this surge.

“My target is to build at least 20 percent of the budget so that we can stash it away into our reserve funds. It’s set up right now for any surplus to go into the reserve,” Nishi stated.

Membership is currently at a 2 percent overall decline through Oct. 19, though some chapters have had more than a 10 percent increase. Top-performing chapters include Chicago, Portland, Sacramento, Seattle and Watsonville-Santa Cruz.

Roudebush also announced plans to form a National Membership Committee that would work on objectives to raise membership across all chapters, in addition to collaborating with the NY/SC to launch a social media campaign to raise JACL’s profile and presence with all people.

Looking ahead, VP of General Operations Michelle Amano announced that next year’s National Convention will be held in Philadelphia from July 18-22. 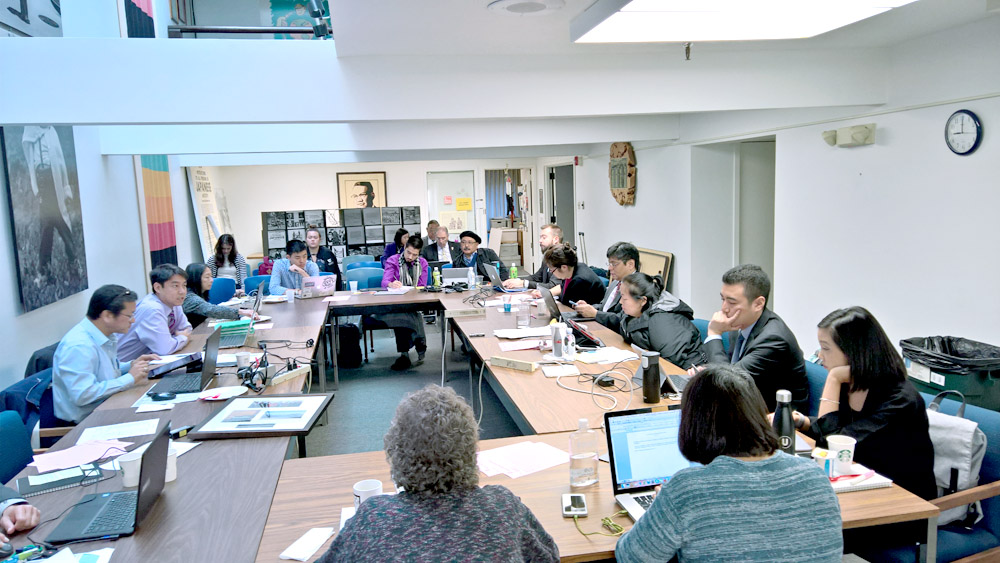 The JACL National Board convened at its San Francisco headquarters on Oct.
21 to discuss the organization’s current state of affairs. (Photo: Susan Yokoyama)