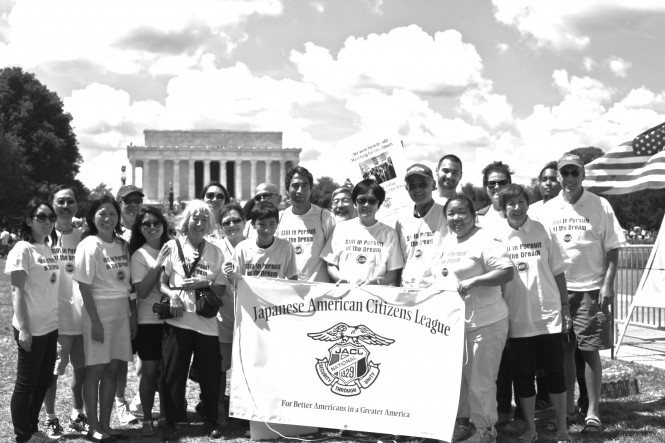 Todd Endo is pictured at the 50th March on Washington event in September 2013; in 1965, Endo traveled to Selma as a student member of JACL to support the African American struggle for human rights. Photo courtesy of JACL National Staff

WASHINGTON, D.C. — The JACL is asking for assistance in locating a Nisei who lived in Monrovia in 1965 and was injured in violent demonstrations in Montgomery, Ala.

JACL will participate in the 50th anniversary commemoration of the Selma-to-Montgomery March for voting rights that will take place in Selma in March 2015, and it would like to include the Nisei Californian in the activities.

In the spring of 1965, Todd Endo, a student member of JACL, traveled to Selma to support the African American struggle for human rights. He wrote articles in the Pacific Citizen about his experiences and views on what was happening in Selma after the death of his friend, Rev. Jim Reeb. One article provided information on other Asian Americans who participated in the demonstrations.

Endo wrote that a Nisei student had been injured in a civil rights demonstration in Montgomery. No other identification was provided for the student, who came from Monrovia.

A television news broadcast in Selma spotlighted the Nisei’s involvement in its coverage of the event. At the time, an African American leader commenting on the incident referred to the student as a civil rights supporter who had come from Japan. The Nisei student clarified he was an American born in California.

The Spokesman Review, a Spokane, Wash., newspaper, wrote in its March 17, 1965, issue, in an article titled “Demonstrators Routed by Montgomery Police,” that eight were hurt by mounted sheriff’s deputies as a result of a “mix-up in police orders.” Under the subtitle “Five Horses Injured,” the article noted the injured included a Japanese American college student who was treated at St. Margaret’s Hospital.

JACL would like to recognize the heroism of the unknown Nisei. White spectators were heard to comment, “Look, even the Japs are here.”

Among other Asian Americans in Selma during the demonstrations was Rev. Andrew Otani, an Issei Episcopalian priest from Minneapolis. His Issei congregation supported and financed his participation in the Selma crisis. There were also three Chinese American students in Selma.

Anyone with information about the unknown Nisei is asked to contact Priscilla Ouchida, JACL national director, at (202) 223-1240 or pouchida@jacl.org.