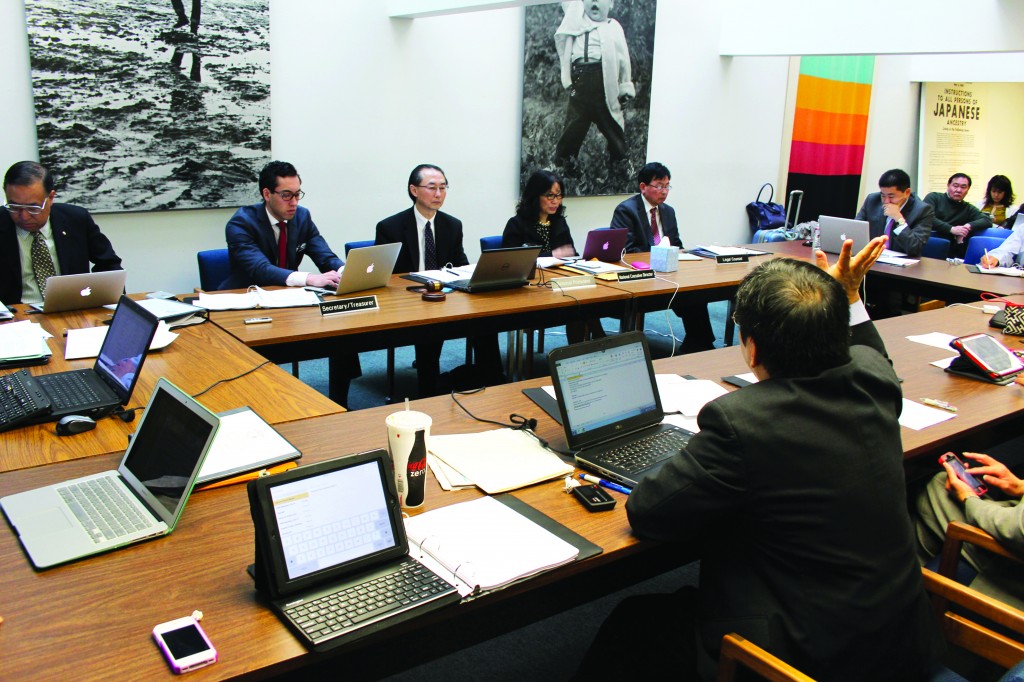 The National Board met on March 1 at its headquarters building in San Francisco’s Japantown. Photo by Nalea J. Ko

The Los Angeles Department of Water and Power’s proposed 200-megawatt solar plant, if approved, would be constructed about four miles from the Manzanar National Historic Site.

SAN FRANCISCO, Calif. –– The JACL National Board voiced its support to preserve the Manzanar National Historic Site as the debate rages about plans to construct a solar energy plant nearby the World War II landmark.

At the March 1 JACL National Board meeting at its Japantown headquarters, board members conveyed the urgency of reaching out to fellow JACLers, affiliate Asian American groups and political allies to rally support to fight the Los Angeles Department of Water and Power’s proposed $680-million solar facility in Owen’s Valley, Calif.

If approved, the solar ranch would be built miles from the former internment camp Manzanar, where some 11,070 Japanese Americans were unjustly incarcerated following the bombing of Pearl Harbor.

“One of the major problems is that originally when this project was proposed, it was proposed in a different location. It was proposed more south, away from Manzanar. But now when the report came out . . . it was in a new location, and that was right next to Manzanar,” said Stephanie Nitahara, JACL Pacific Southwest District regional director, whose grandparents were incarcerated at Manzanar during WWII. “Originally, the Japanese American community didn’t have any opportunity to comment on this issue. But then when the new proposal came out, the Japanese community was up in arms.”

Continued Nitahara, “And so we’re still just working on this issue, and hopefully, the voice of the community will be heard.”

Japanese American organizations, including JACL, have expressed concerns that the construction of the solar ranch would destroy the historical landscape that their ancestors experienced during WWII. Critics of the LADWP proposed solar ranch are hoping to raise awareness about the issue before plans are finalized.

“On this issue, we also met with director Jon Jarvis at the National Park Service to bring this to his attention,” said JACL National Director Priscilla Ouchida. “We’re trying to use all the resources we can to address this problem.”

The 200-megawatt proposed Southern Owens Valley Solar Ranch would, according to LADWP, be built about four miles west of U.S. Highway 395, provide 440 gigawatt-hours of renewable energy to approximately 75,000 Los Angeles households and use a workforce of 350 LADWP employees, including new hires from the community.

The solar ranch would be constructed on 1,200-acres of LADWP-owned land in California’s Inyo County.

“While we firmly believe the most effective use of resources is to expand solar projects here in Los Angeles, we should note that the LADWP owns more than 80 percent of the land in the Owens Valley,” said Bruce Embrey, Manzanar Committee co-chair, in a statement released in response to a Los Angeles Times(ITAL) editorial published on Jan. 2. “This is one reason it is difficult to understand why lands so close to the former grounds of one of America’s concentration camps is the only suitable location.”

Embrey added that 2014 is the 10th anniversary of the Manzanar National Historic Site visitor’s center opening, where some 1 million visitors have traveled since.

“This year also marks the 50th anniversary of the Civil Rights Act,” he said. “Our country has come a long way since 1964, and we hope that as we celebrate the advances we’ve made in the area of civil rights, the concerns of those Americans who were denied those rights simply because of their ancestry are not swept aside and ignored.”

Those against the proposed Southern Owens Valley Solar Ranch have started a petition on Change.org. At press date, about 1,619 supporters signed the petition, and 23,381 more are needed.