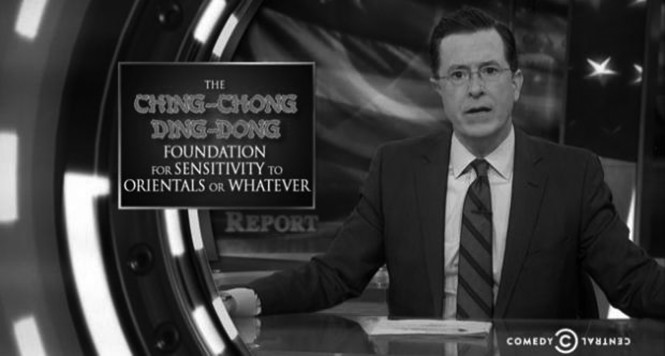 Some Asian American activists remain outraged over the comedy material that ignited the #CancelColbert Twitter firestorm.

As comedian and political satirist Stephen Colbert prepares to take his seat as the host of CBS’ “Late Show,” some Asian American community activists are vowing keep alive the discussion that was sparked from the #CancelColbert controversy.

Writer and activist Suey Park, who ignited the Twitter firestorm, co-wrote a piece in Time Magazine with fellow activist Eunsong Kim. In the April 10 article, Park and Kim explained their frustration.

“The marginalization of ‘other voices’ — except when those ‘others’ are brought in only to aid in the cheap punch line of a joke — is complete. This is aggression that we do not have to accept. We will protest this until it ends,” they wrote. 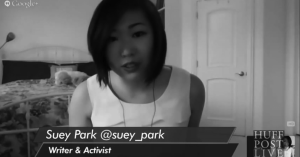 Korean American writer and activist, Suey Park, is pictured here in a screen shot of her HuffPost Live interview with Josh Zepp.

The Korean American initially responded to a March 27 tweet sent out by @ColbertReport that stated, “I am willing to show #Asian community I care by introducing the Ching-Chong Ding-Dong Foundation for Sensitivity to Orientals of Whatever.” The tweet was referring to a satirical sketch on the Comedy Central show that mocked Washington Redskins NFL football team owner Dan Snyder for creating a charitable foundation for Native Americans, while the team still uses the racially offensive term.

In response to the situation, the JACL issued a statement objecting to “Colbert’s use of racist jokes to make a larger point about bigotry and ignorance.”

“Tolerance and diversity is an ongoing education process. There is still a misunderstanding of racism as it applies to AAPIs,” said Priscilla Ouchida, JACL national director. “Each incident becomes a ‘teachable moment’ to educate the public about Asian stereotypes and the perpetuation of those stereotypes.”

JACL National, Ouchida says, has been actively working to raise awareness about cultural sensitivity and diversity in the media, meeting with officials from ABC, CBS, Fox and NBC.

Colbert, who will take over for David Letterman in 2015, deleted the Twitter account responsible for the controversy, with the help of the site’s co-founder Biz Stone.

“According to news reports, Colbert will be dropping his conservative ‘Colbert Report’ character, which was where the offending material was placed,” Ouchida said. “Colbert’s intent was to draw attention to the fallacy of conservative arguments. The piece went south when it used an offending stereotype in the process. At this time, I do not have significant concerns. Colbert and the network are on notice, and I think they will be more thoughtful before straying into that territory again.”