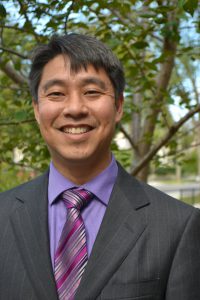 The position of JACL executive director, which is based in Washington, D.C., has been vacant since the departure of Priscilla Ouchida, who served in the post from March 2012-June 2016.

Inoue, 45, has previous experience in the nonprofit sector that includes a 10-year stint at Christ House as administrative director, the National Association of Public Hospitals and Health Systems as director of grassroots and government relations and at the Centers for Medicare and Medicaid Services as a social science research analyst.

Inoue will be introduced to the JACL as executive director at the 48th annual JACL National Convention, which is set to take place in Washington, D.C., from July 6-9.

Inoue told the Pacific Citizen that JACL is “an organization I care deeply about” and that he was cognizant of “the fact that JACL is the oldest Asian American civil rights organization” and that there is the need to “stand up for civil rights, for social justice. I think that’s part of the purpose of the role that JACL does serve.”

Regarding JACL’s ever-present financial stresses, Inoue said, “It’s well-known that JACL is not in the best financial position right now and does need to work on fundraising and strengthening the organization.

“I think that bringing my 10 years of administrative experience to that will certainly be necessary,” Inoue continued. “I look forward to that challenge.”

Echoing Inoue’s thoughts about JACL’s finances, Mayeda said among Inoue’s primary priorities in his new capacity will be “fundraising and fund development for the organization.”

Mayeda continued, “That includes meeting with sponsors at the convention, having the sponsors get to know him and his skill-sets and being the ambassador to the organization, representing all of our coordinated interests within JACL.”

In an email, Mayeda thanked Nitahara and Yoshino for their service in helping JACL continue to gain a “greater visibility to all of our community partners.”

Mayeda also thanked the JACL’s Personnel Committee for laboring through “dozens of conference calls that went into the late hours of all time zones” when discussing the candidates for the position.

Inoue has been a JACL member for more than 16 years. In 2004, he was part of the JACL/OCA Leadership Conference. He later served as an advisory neighborhood commissioner, an elected position, for the District of Columbia.

Inoue was born in Fort Wayne, Ind., to Tatsutoshi Inoue and Linda Moy, and he grew up near Chicago and Cincinnati.

Inoue graduated from Cornell University, having received the JACL’s Mr. and Mrs. Takashi Moriuchi Scholarship. He completed his master’s degree from Ohio State University. He is married to Kaori Kawakubo Inoue.

Together, they are raising two children, Mika and Akira.