JALD Completes Tour in Japan and Engages With Japanese Leaders 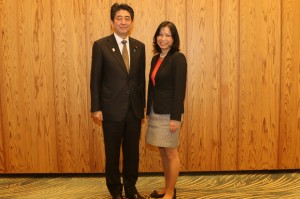 The 2015 Japanese American Leadership Delegation (JALD) successfully concluded its trip to Japan from March 6-14 that included a visit with Prime Minister Shinzo Abe. The delegation discussed the Prime Minister’s upcoming trip to the United States in the meeting, which was the highlight of a program that included discussions with HRH Princess Takamado of the Japanese Imperial Family, members of the Japanese Diet, meetings with business leaders and heads of Japanese corporations and a symposium on aging.

Prscilla Ouchida along with other delegates focused on addressing issues with aging Japanese and Japanese American populations.

In meetings, the delegation discussed and acknowledged the important alliance that has developed over the past 70 years between the U.S. and Japan, as well as recognized the role Japanese Americans have played in building a strong bilateral relationship between the countries. There also was focus on collaborative efforts to address issues associated with aging Japanese and Japanese American populations, as well as promoting student and other people-to-people exchanges.

The trip coincided with the fourth anniversary of the March 11 triple disaster in Japan. The group visited Hiroshima and Tokyo and learned about issues relating to atomic survivors, aging, economic ties between Japan and the United States, economic strategies for Japan and an initiative to increase women in the workforce.

The trip was sponsored by the Japanese Ministry of Foreign Affairs to provide an opportunity for Japanese Americans to deepen their understanding of Japan. Since the JALD began in 2000, 166 delegates have participated in the program to date.