Larry Oda Back in the Saddle — Again

With no candidates for JACL’s presidency, the 2006-10 prexy retakes the reins.

(Editor’s Note: This article was written after the Aug. 3-7 JACL National Convention, at which Larry Oda was elected to serve a two-year term as JACL national president. Oda held the same position in consecutive terms from 2006-10; a member of the Monterey Peninsula Chapter of JACL, he also served JACL nationally in other capacities, including vp of general operations and national secretary-treasurer. Oda, 77, served the city of Salinas, Calif., as its maintenance superintendent until he retired in 2017. He also served as chairman of the National Japanese American Memorial Foundation from 2015-19.)

At its 2022 National Convention in Las Vegas earlier this month, the Japanese American Citizens League entered uncharted waters: For the first time in anyone’s memory, JACL had zero candidates in the running to replace incumbent Jeffrey Moy, who served two back-to-back terms as national president, beginning in 2018.

Fortunately, the organization did not have to implement a contingency plan in the event no one was elected. That’s because Larry Oda, who served as JACL’s national president in the first decade of the 2000s, agreed to run again.

Asked what compelled him to interrupt his retirement and take on this task, Oda told the Pacific Citizen that prior to the convention, he had heard that there was no one running for the office, which left him “surprised and concerned.” 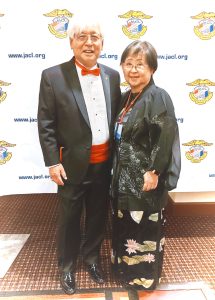 Larry Oda and his wife, Anne. Larry begins another tenure with JACL as its national president after having served previously in the role in the early 2000s. (Photo: Cindy Siu)

But before he, as he put it, “was drafted” to run, his chapter board first asked his wife, Anne Oda, who also serves on the board, what she thought. “Usually, she’d be a little more reserved and say, ‘Well, you know, we should ask him’ or something like that,” said Oda. “But she said, ‘Yes, he needs to do this.’”

This was the week before the convention, and several formalities needed to be checked off and attended to first. Once, however, that had been accomplished, Oda had a clear path to the JACL’s presidency.

Asked if the circumstances that, in 2022, compelled him to retake the role he held more than 10 years previously constituted a crisis for JACL, Oda answered, “We may be hiding our head in the sand, but, yeah, I think it is a crisis. I mean, for the whole slate to be empty?”

“I think that we’re in unprecedented times,” Oda continued. “We haven’t had this happen, and we need to look at what are we doing. Why aren’t we generating the kind of leaders that will step up and take responsibility, make decisions for the group?”

Oda recalled his days as the maintenance supervisor for the city of Salinas, Calif., and compared it to JACL’s status quo.

If 2022’s dearth of would-be leaders was an indication that JACL is in fact facing a crisis, Oda has some ideas on what he needs to prioritize between now and 2024. One of those priorities is setting up a succession plan to preclude what happened in 2022 from recurring.

“I don’t want to disparage the young board, but there was no thought of succession,” he said.

Oda also told Pacific Citizen that he wants to look at the results of the actions JACL has taken. Using the escalation in anti-Asian violence as an example, he said, “We’ve issued press releases saying this is wrong and whatever, but what we’ve done hasn’t really had much effect.

“These incidences are still occurring, they haven’t subsided at all,” he continued. “What we’ve been doing has not been effective to me. You know, if we’re looking at the metric of our actions, you know, what we’re doing isn’t causing any effect.

“If you keep beating your head against the wall, and the wall doesn’t move — and if we’re trying to move the wall —we got to do something else.”

Oda said JACL needs to emphasize educational programs that “encourage the youth to become involved in the community” and discern what needs to be done to “encourage folks to become (JACL) members.”

Considering his game-time decision to throw his hat into the ring, Oda admitted that he is still “trying to formulate some coherent goals and objectives” under his presidency.

On JACL’s perennial problem of finance, he said, “What I’m hoping to do is to utilize some fundraising targets that we haven’t really gone after.

“We talk about diversifying our funding sources,” he continued. “That’s a bunch of bull—-. It’s words … there’s a whole lot more that goes into it to get to that point.”

As for growing the JACL’s membership, Oda said, “We need to do a better job of promoting ourselves to the population. … I think [there are] 850,000 JA’s — and we have 7,000 members, you know, less than 1 percent. What’s going on there? What can we offer that would encourage them to be members?”

As someone who has held the position of JACL national president before, Oda was sanguine

“I don’t consider myself one of the best presidents that JACL has ever had. But I think that I’m better than some of them. … I don’t see myself as equal to a lot of them, like Floyd Shimomura, or any of the early guys that really put their heart and soul into the organization,” he said.

Referring to a post-Larry Oda succession plan, he said, “I need to find someone that’s better than me.”

For now, however, Oda’s priority is simple: “I’m gonna do the best I can.”