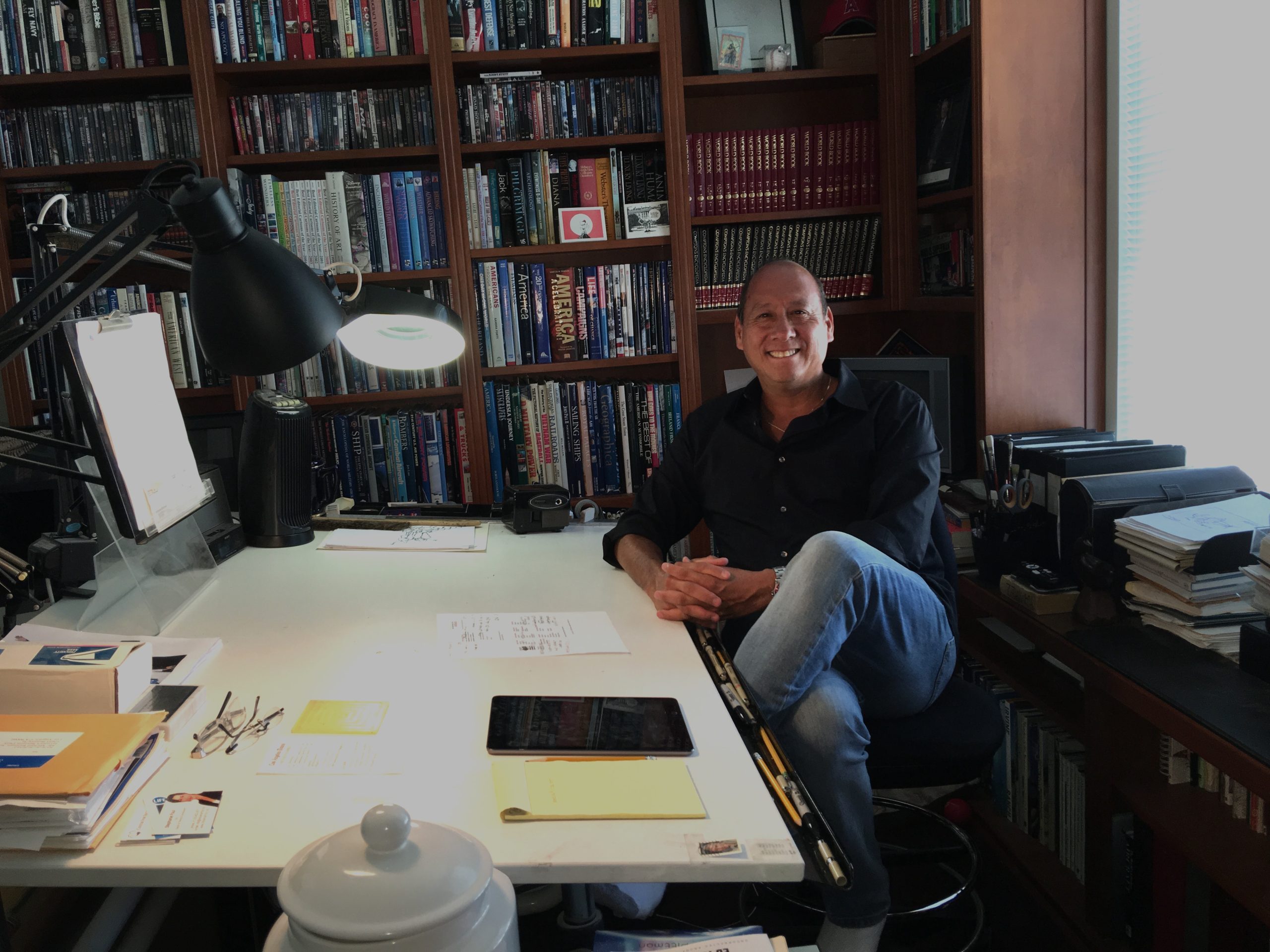 The impact of his drawings is what made Pulitzer Prize- winning political cartoonist Michael Ramirez fall in love with his work. (Photo: George Toshio Johnston)

In the movie business, the top accolade is an Oscar. For television, the Emmy rules. In music, a Grammy is golden. And in journalism, the Pulitzer Prize is the pinnacle — and political cartoonist Michael Ramirez has two.

The two Pulitzers, however, aren’t the only kudos the 55-year-old, self-described “consistent constitutional conservative” and “free-market capitalist” has collected over his cartooning career. 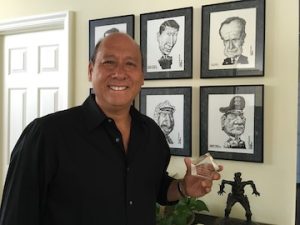 Michael Ramirez displays one of the two Pulitzer Prizes he has won for his editorial cartoons. (Photo: George Toshio Johnston)

The son of a Spanish and Mexican father and native Japanese mother has also won  the 2015 National Cartoonists Society’s Reuben Award (named after cartoonist Rube Goldberg) and is a five-time winner in the organization’s editorial cartoon division.

Not too shabby for being, as Ramirez describes it, the black sheep among his four siblings, all of whom pursued medicine and became physicians. But their choice to “pick up the scalpel” came later in life. As the middle child between an older brother and sister and a younger brother and sister, he picked up the pencil early in life, and his aptitude manifested immediately. Drawing came as naturally as breathing for Ramirez.

Ramirez fondly remembers how his late  father, Edward Ramirez, used to draw for him. “We used to sit there and draw together,” he says. “Best dad in the world.” He met his wife while stationed in Japan in the Army, serving in Military Intelligence. 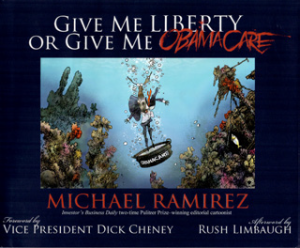 “Give Me Liberty or Give Me Obamacare,” the latest collection of Michael Ramirez’s political cartoons, was published in 2015.

Michael Ramirez also remembers growing up in Japan, where he was born, and how his first language was Japanese. “Today, my Japanese is very poor,” Ramirez related. Other than when he takes his elderly mother, Fumiko, to sushi every Monday night and interacts with the sushi chefs, he said, “I don’t use it very often.”

Drawing, however, stayed with Ramirez — but his future career was almost derailed because he was too good at it. His entry in a sixth-grade art contest placed second “because they thought my parents had helped.” His pencil drawing of Auguste Rodin’s Thinker sculpture could not have been, it was decided, drawn by a kid.

After thanking everyone, Ramirez said he chucked his second-place ribbon into a trash can when no one was looking — but added that his dad made him retrieve it. It was a lesson in humility. The point isn’t winning — the point is doing, said father to son. 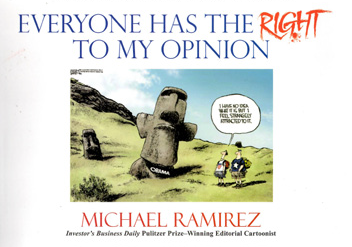 Still, the incident turned the young Ramirez off to drawing until his college years at the University of California, Irvine, where, as a triple major (biological science, fine art studio painting and art history), he also wrote for the school newspaper. He admits, however, that his ulterior motive in pursuing journalism was to get free stuff like concert tickets and records. Political cartooning was not even a thought.

“One day I was working on a painting, and I brought it into the office to file a story, and my editor saw the painting. She said, ‘I didn’t know you could draw. We’re having a student election. Why don’t you do a cartoon on it?’ I thought, ‘Why not? It sounded like fun.’”

After interviewing the candidates and concluding that the election was, for them, a popularity contest, Ramirez said he drew a cartoon that “just skewered them all.”

“When the newspaper came out, we had three days of protest on campus over this dumb drawing,” Ramirez recollects. “All this time I had been writing what I thought were these hard-hitting editorials and nobody really cared. But you draw one picture, and everybody’s mad at you. What a great forum!”

With that, the die was cast, a new tack beckoned and the idea of pursuing medicine (like his siblings) began to recede. Another cartoon would solidify his future career choice. Ramirez said the Newport Ensign newspaper saw his work in the UCI school paper and offered him $50 a pop for editorial cartoons. He could knock out a cartoon in 30 minutes — and still have time to surf!

“There was this incident where this guy got pulled over by the Newport Beach police,” Ramirez said. “They arrested him for drunken driving. They kind of roughed him up a little bit, according to him, and didn’t allow him a phone call.

“He turned out to be a Newport city councilman. So, I do this cartoon where I had this guy hogtied on the hood of a police car with his shoe wedged in his mouth and the arresting officer was explaining to his sergeant that ‘I was merely reinforcing his constitutional right to remain silent.’

“When that cartoon came out, I just happened to be in the office — I think I was collecting my check — and the police chief came into the office, and he yelled at the publisher, he yelled at the editor and he tried to find out where I lived!

“It had a profound impact on my thinking about the job. What a profound impact these drawings have. … It was the first time I realized there was a purpose to this art form. It was at that point that I fell in love with it.”

Ramirez remembers how some cartoons published by the Los Angeles Times prompted letters to the editor that the paper ended up sending to the Los Angeles Police Department due to their threatening nature.

As for why a well-crafted political cartoon can have more impact that a well-written opinion piece, Ramirez has his theories. “People are drawn to the visual medium,” he said. “It has a more powerful, dramatic effect and you’re utilizing exaggeration, satire and sarcasm as tools to get your point across.”

As for his influences and inspirations in political cartooning, Ramirez has a pair of cartoonists who fit that bill. “For me, because I grew up reading Jeff MacNelly and Paul Conrad — those were probably my biggest influences,” he said, also citing Mad Magazine, which he read in high school, and its artists, Jack Davis and Mort Drucker.

While Ramirez’s politics were 180 degrees apart from the liberal Conrad, with whom he was friends, he admired Conrad’s use of drama. “I thought he was crazy, but I loved his drawings,” Ramirez said. As for MacNelly, he said it was the same thing. “Wonderful graphics. He added another additional element, which I utilize to this day, which was using humor as a vehicle for expanding his audience. Jeff was so good at that.”

But with the Los Angeles Times skewing more liberal than Ramirez’s more conservative perspective, he was snapped up by Investor’s Business Daily when its editor-in-chief, Wes Mann, read that Ramirez’s contract wasn’t being renewed.

“I just shot him a little email and asked if he was looking for a new newspaper home — I thought he’d philosophically fit right in with our group,” Mann recalled.

Ramirez met with IBD’s founder and publisher, stock investing savant William O’Neil, who also offered him the title of senior editor for the editorial section. Ramirez recalls promising O’Neil he’d help raise the profile of the paper’s name — and win a Pulitzer for the paper, a vow he made good on in 2008.

Mann said it was a “real kick having him on the staff, to work with somebody who is the best in the business. He’s in a league of his own and has been for years.”

Still, being the paper’s only Pulitzer winner still wasn’t enough to shield Ramirez from getting the boot when the paper went weekly in May 2016, which meant layoffs in all departments of the paper. He’s now with the Washington, D.C.-based Daily Signal and continues to be syndicated, with his cartoons also appearing in USA Today.

Having parted with IBD, Ramirez says his life hasn’t changed at all. He did, however, say he is negotiating with a new newspaper, but he can’t disclose its names or the terms just yet. He’s also an in-demand public speaker and appears occasionally on television.

With the 2016 presidential race under way, Ramirez is busy indeed — but he’s unimpressed with both the Republican and Democratic candidates, describing them with the old gag of being “the evil of two lessers.”

Underpinning his art as a political cartoonist is his perspective. “I still believe that America is extraordinary because its citizens are extraordinary, not because of its government. I believe in limited government,” Ramirez stated.

“My fundamental philosophy was shaped by my parents. My dad was in the Army for 23 years. He was a conservative Roman Catholic. I’m still a Roman Catholic myself. Meantime, in Japanese society, it’s a society based on the idea of self-responsibility and the things that you do as a reflection on yourself and your family. Those conservative values have been incorporated into my philosophy,” he says.

When he’s not in front of his drawing board at his home studio, Ramirez fronts a Top 40 rock ’n’ roll band — the DeLuz Band — as the lead singer, keyboardist and rhythm guitarist.

“I’ve got a great band,” he said. “We’ve got seven people in the band, everyone’s been in bands before and they’re all terrific musicians. I’m the weak link of the band,” he joked.

In October 2015, a curated collection of Ramirez’s political cartoons — “Give Me Liberty or Give Me Obamacare” — was published, a follow-up to his 2008 tome “Everyone Has the Right to My Opinion.” The blurbs on the newer book’s back cover jacket is like a who’s who of Republican opinion leaders: radio commentator Rush Limbaugh, pundit Ann Coulter, former California Gov. Pete Wilson and former Vice President Dick Cheney.

Still relatively young and in good health, Ramirez won’t be slowing down anytime soon. Having won two Pulitzers, Mann speculates that he would be happy to catch MacNelly’s three Pulitzers or even better, tie or surpass Conrad’s four Pulitzers.

“I think he always wanted to win as many as Paul Conrad. He believes in editorial cartooning. He thinks it has a real role in journalism. He’s almost become America’s political cartoonist. Who knows how popular he would be if he were not conservative? But he’s never wavered, he’s never gone mushy or soft just to win prizes,” Mann said. “Personally, I think they ought to retire the award for editorial cartooning and just give it to him. He’s the best. He’s certainly the best of our era.”