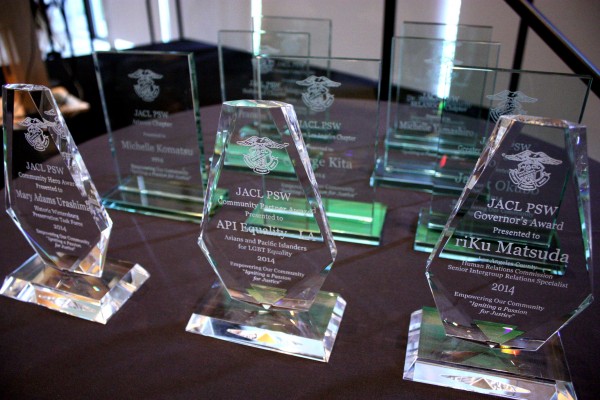 The JACL-Pacific Southwest District reached out to a wider audience this year, especially the younger generation and LGBTQ community, during its 18th annual Awards Luncheon at the Skirball Cultural Center in Los Angeles on Sept. 20. 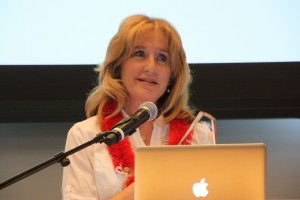 This year’s luncheon, themed “Empowering Our Community: Igniting a Passion for Justice,” honored community heroes and highlighted the success of PSW’s four flagship programs: Local Leaders, which develops young adults in community leadership and public service; the Nikkei LGBTQ Initiative, which strikes to build a more inclusive community for those who identify as lesbian, gay, bisexual, transgender, queer and/or other nonconforming gender and sexual identity; API Rise (Asian Pacific Islander Re-entry and Inclusion Through Support and Empowerment), a support group and growing coalition for formerly incarcerated Asian Pacific Islanders, families, youth and community-based organizations; and Bridging Communities, a collaboration between JACL, Nikkei for Civil Rights and Redress, Council on American-Islamic Relations-LA and Kizuna that offers Japanese American and Muslim American youth the opportunity to learn about the history of their communities while cultivating identity and the importance of solidarity.

“There was so much energy between the generations,” said attendee Dean Nakanishi, administrator of the Asian American Drug Abuse program. “Traci Ishigo, program director, had an array of spectacular new programs. I think the luncheon exemplified a shift in a new direction.” 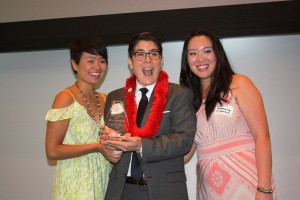 The Governor’s Award was given to riKu Matsuda, who has worked for the L.A. County Commission on Human Relations for 10 years and is currently a senior intergroup relations specialist. Matsuda has dedicated her life to social justice and the LGBTQ community by educating others through building community and workshops aimed at opening communication across all members of society. During her acceptance speech, Matsuda invited everyone to “Okaeri,” a Nikkei LGBTQ gathering that will be held at the Japanese American National Museum on Nov. 14 and 15.

“’Okaeri’ is a place for you, it’s a place to start. It’s not a place for everybody who already has an answer,” said Matsuda, who concluded, “I feel humbled. It reaffirms my commitment to do this work forever and for all of us.”

The Community Organization Award was presented to API-Equality LA, a group that advocates for equal marriage and other API LGBTQ issues. The organization recently celebrated its ninth anniversary.

Said Deanna Kitamura, who chairs API Equality-LA’s Legal/Policy Advisory Committee: “JACL as been on the forefront of the LGBTQ rights movement. In the 1990s, JACL was the first national civil rights organization to support marriage equality. History has shown that JACL was decades ahead of the curve. . . . We’re also grateful for our partnership with JACL PSW.”

Receiving the Community Hero Award was Mary Adams Urashima of the Historic Wintersburg Preservation Task Force for her efforts to save six structures in Huntington Beach, Calif., that represent Japanese Americans who settled in the city, in particular, the Furuta family, who built a successful farm in the area.

The task force is currently fighting to save Historic Wintersburg from demolition in May 2015.

“We so appreciate your help,” Urashima said. “We need your support. We are currently trying to raise $35,000 for an Urban Land Institute and technical advisory that can show the way to preservation and adaptive reuse of the property that will help us get funding and help us get partners.”

In addition, the program introduced the New Mexico JACL, which was represented by Joseph Day, and handed out awards for chapter leaders.

All awardees received a certificate from the California Assembly, made possible by assembly member Al Muratsuchi, and an award memento.