Boy Scouts and Cub Scouts from Troop 201 (Wesley United Methodist Church) and Troop 611 (San Jose Buddhist Church Betsuin) salute the motorcade carrying the ashes of Norman Y. Mineta near the railroad tracks where the Mineta family and other San Jose residents of Japanese ancestry were forced onto trains carrying them to prison camps during World War II. (Photo: Craig Uyeda)

Norman Mineta’s hometown of San Jose, Calif., welcomed him home for the final time on June 15, as the remains of the late Transportation secretary and former mayor of San Jose were accompanied by his wife, Deni, and members of the family as their plane touched down at Norman Y. Mineta International Airport. 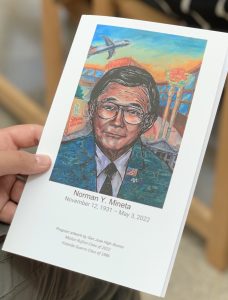 Mineta passed away on May 3 at age 90 following a lifetime of service to his community and country, serving as mayor of San Jose from 1971-75, 20 years in Congress and a Cabinet secretary in two presidential administrations, in addition to leading the country through the aftermath of the Sept. 11 terrorist attacks as Transportation Secretary, going on to spearhead the effort to establish the Transportation Security Administration in 2001.

Mineta’s remains were carried by U.S. Coast guard Rear Adm. Joanna Nunan, after which a motorcade processional then made its way throughout the city of San Jose to carry him to San Jose City Hall, where a ceremony was held to pay tribute to the man who broke barriers for Asian Americans and all Americans that he served.

The motorcade made several stops along its route, proceeding through San Jose’s historic Japantown, the San Jose Buddhist Church Betsuin, the Mineta family home, Wesley Methodist Church (Mineta was a church member) and the railroad tracks where “the Minetas and hundreds of other San Jose residents of Japanese ancestry were forced, at gun point, onto trains taking them to prison camps in early World War II,” according to an official statement.

There to greet the motorcade processional at the railroad tracks that cross Fifth Street between Empire and Washington were Boy Scouts and Cub Scouts from Troop 201 (Wesley United Methodist Church) and Troop 611 (San Jose Buddhist Church Betsuin).

On the day the Mineta family was forced to leave their hometown of San Jose for Heart Mountain, Wyo., following the issuance of Executive Order 9066, Norman Mineta was wearing his Scout uniform.

At San Jose City Hall, Mineta’s ashes were placed to Rest in Honor, the first such ceremony in the city’s history. 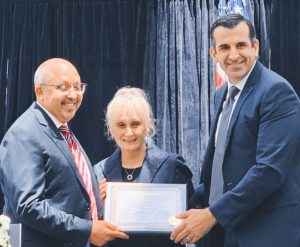 A memorial service, which was attended by more than 800 people, including former President Bill Clinton, was held at the San Jose Civic Auditorium on June 16. During the service, Liccardo officially declared June 16 to forever be known as “Norman Mineta Day in San Jose.”

“Our community knew him not as ‘Mr. Mayor,’ ‘Mr. Secretary,’ ‘Mr. Congressman’ but simply as Norm,” Liccardo said during the service.