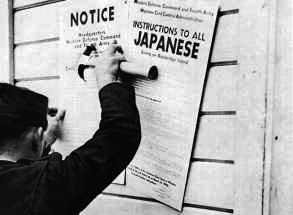 As we pause to remember the significance of the 75th anniversary of the signing of Executive Order 9066, we recall the personal injustice and personal hardship it imposed on the 120,000 men, women and children who were affected by the government’s implementation of that executive order. It caused personal damage, dislocation, physical and mental trauma, and it offended our Constitution.

Today, it is important to heed the lessons from the incarceration experience about acting out of fear and bigotry by targeting vulnerable groups in defiance of America’s values.

As reported by the Southern Poverty Law Center (SPLC), the growth in hate groups is on the rise accompanied by an increase in crimes directed at Muslims.

SPLC documented 867 bias-related incidents in the first 10 days following the election, with more than 300 targeting Muslims and immigrants.

There is the troubling specter of banning immigration based on religion and the aggressive and broad-based use of deportation that results in uprooting and tearing families apart.

There is the failure to accurately acknowledge history in the genocide of the Jewish population during World War II.