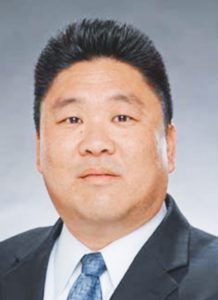 (March 28, 1970-Sept. 4, 2019)
Matsubayashi, 49, a longtime staff member of the Little Tokyo Service Center who rose to become its executive director, died after being diagnosed with an aggressive brain tumor in May 2018. Under his leadership, the Terasaki Budokan in Little Tokyo began its long journey toward completion, set for the spring of 2020. The son of Kay and George Matsubayashi, Dean grew up in the Venice-Culver City area of Los Angeles County, participating in Boy Scouts and basketball. At Venice High School, he was played varsity point guard and one year was named the team’s MVP. He graduated magna cum laude from UC Irvine, where he double-majored in political science and sociology before attending the John F. Kennedy School of Government at Harvard University, where he earned his master’s degree. He met his future wife, Kim Kawaratani, while both of them were attending Harvard. He is survived by his wife, Kim; their daughter, Emma and son, Sei; siblings, Erik, Craig and Tina; his parents; and his parents-in-law, Lilian and Yukio Kawaratani.