Patience & Patients: Who Was That Masked Man?

Dr. Gene Dorio, who is president of the Los Angeles County Commission for Older Adults and an assemblyman to the California Senior Legislature, still makes house calls to patients in the Santa Clarita Valley. (Photos: Courtesy of Gene Dorio)

Amidst the pandemic, Dr. Gene Dorio still delivers care to the elderly.

Every evening when Dr. Gene Uzawa Dorio returns from his day’s labors, he puts himself through a new routine so that he doesn’t bring along an unwelcome, unseen, deadly and tiny, very, very tiny guest into his home.

“I enter the house through the garage, close the door behind me, shed all my clothes and put it into the washer, run into the shower and wash everything, including my glasses,” said Dorio, 68, a physician based in the northern part of Los Angeles County’s Santa Clarita Valley.

His clothes are washed in hot water and dried overnight, so that they’re clean and ready for the next day when Dorio, whose specialty is geriatric medicine, begins anew his quotidian schedule of visiting his patients where they reside.

Yes, in this day and age of telelearning, teleconferencing, telecommuting and telemedicine, this good doctor actually makes house calls.

But the spread of the novel coronavirus, which is especially dangerous to his golden-aged clientele, has also proven deadly to health-care providers.

A few of Dorio’s patients have developed COVID-19, so, he has had to take the appropriate steps to protect not only his other patients, but also his wife, Robin Clough (who also works with elderly people as a senior advocate at a senior center) and himself.

What infuriates Dorio are those who say this coronavirus pandemic is a hoax. “Whenever you have the doubters, we have to convince them that there’s no hoax. Secondly, these politicians, when they use it as political gain, when they start doing that, we have to go after them.”

“I have the Clorox cleaners, I have the [antiseptic] gels that I will use,” Dorio said. “I’m very careful in cleaning off my stethoscope, my blood pressure cuff, my temperature monitor, my O2 saturation monitor — these are all the tools that I use to assure that I’m not going to bring it home or put it in my bag and contaminate other things that I might use, but also to not give it to the next patient.”

And, like others in the health-care field, Dorio has encountered shortages in the personal protective equipment that is now de rigueur. At the time of his interview, he was down to a couple of masks, and gloves were “few and far between.” One of his masks even disintegrated on him.

While the word about the importance of things like hand washing and mask wearing in public to prevent the spread of the virus has been widely disseminated, Dorio wonders whether any studies have been done as to whether one’s hair may be a means of transmission. To be safe, he wears a shower cap on house calls, in addition to the other personal protective equipment (PPE) he must use.

Unfortunately, because of the precautions and extra time it takes to “suit up,” Dorio has also had to reduce the number of house calls he can make each day.

But, Dorio continues to make his rounds, write his physician’s blog and do what he can, as the just-re-elected president of the Los Angeles County Commission for Older Adults and an assemblyman to the California Senior Legislature, to make sure the spotlight stays on the needs of the elderly and keep hospitals, insurance companies and politicians focused not just on the bottom line but also on helping people.

Dorio was born in New York City’s Harlem after his parents returned from Japan to the U.S. His mother, Violet, was a Japanese Canadian nurse, and his father, Carl, was an Italian American serving in what was then the Army Air Force. They met after World War II when she was working for the American Red Cross, and he was sent to Tokyo’s Red Cross hospital for rehabilitation after he was injured while on duty.

According to Dorio, his parents fell in love, got married and moved to New York City and became activists in civil rights issues — which got them “kicked out,” as he put it.

“They had to move cross-country to California, where they had some friends,” Dorio said. Because they were a mixed-race couple, they used the “green book,” popularized by the movie of the same name, to find lodging as they drove across the country.

They settled in Los Angeles, where Gene, his older brother, Raymond, and younger brother, Ed, would all graduate from Los Angeles High School. After being activists on the East Coast, Gene said his parents became quiescent as they raised their family.

Their father, who died some 30 years ago, became a social worker for the county, and their mother continued to work as a nurse. Now 98, Violet lives in Santa Clarita, as does Ray, who also became a physician. 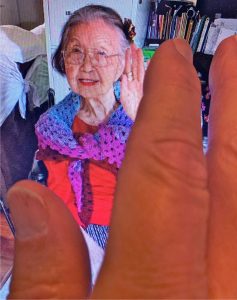 Gene Dorio, who has been practicing geriatric and internal medicine in the Santa Clarita Valley for 32 years, clearly remembers being 11 years old when he decided to become a doctor. It was a path that included learning about surgery, trauma, orthopedics and ER medicine at Houston’s Baylor College of Medicine, known then for the famed heart surgeon Dr. Michael DeBakey.

He followed that with a yearlong stint at the University of Maryland and another year in Detroit.

“I was running one day, and it was Memorial Day, and it started to snow. I thought to myself, ‘Uh, I’m not sure about this, being in Michigan.’ So, the next day, I called UC Irvine, and over the telephone, they accepted me into their internal medicine program,” Dorio said.

He would spend three years there and later moved north to Santa Clarita, where he opened a practice that was not initially focused on geriatric care.

Even though the population then wasn’t too large, he did have many seniors among his clientele and began the practice of spending one day a week making house calls.

“It got to be bigger and bigger as Santa Clarita became a city and a place where people moved to and brought along their parents,” Dorio said, until his practice finally became one dominated by house calls.

Seeing his father, who was 20 years older than his mother, deal with the changes that came with age, also influenced Dorio’s shift into geriatric medicine.

That shift and emphasis on house calls fits Dorio’s philosophy as a physician, which is often at odds with how medicine is practiced now in the U.S.

For instance, he says that when he makes a diagnosis, 80 percent of the time it comes from history-taking and asking questions.

“If a doctor hasn’t asked you 20 questions, then you haven’t seen a doctor,” he said. The other 20 percent comes from an in-person, physical exam.

“If you’re seeing a doctor for five minutes, which is a major complaint now — ‘Hello, how are you, see you later’ — if that’s all you get, that’s not medicine to me,” he said. 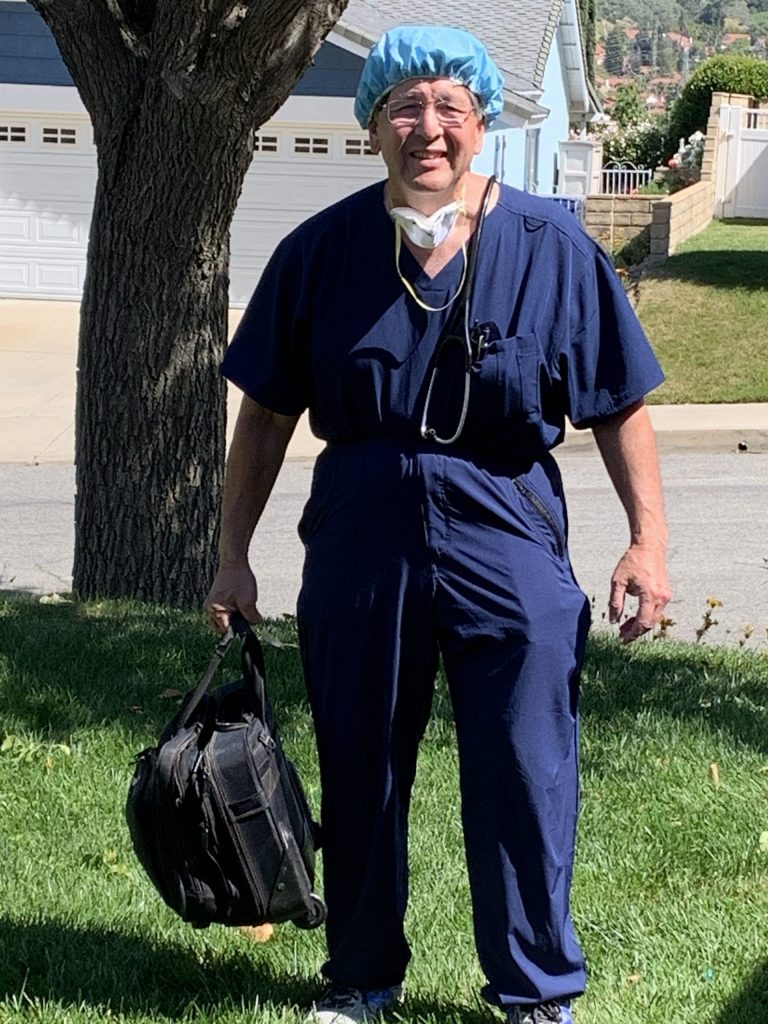 Gene Dorio in his PPE prepares to make a house call. (Photo: Courtesy of Gene Dorio)

While technology is great and necessary, Dorio believes medicine should not be solely reliant on tech and that getting a good history and giving a thorough physical exam takes time. “There are some things that can only be done by being there,” he said.

What infuriates Dorio are those who say this coronavirus pandemic is a hoax.

“Whenever you have the doubters, we have to convince them that there’s no hoax. Secondly, these politicians, when they use it as political gain, when they start doing that, we have to go after them,” Dorio said.

For the future, Dorio puts his trust in science and believes scientists will figure out how to rapidly isolate and treat this virus and, in the future, other disease-causing organisms.

“The scientists will say, ‘You have to do this.’ Will the politicians who make the policies make changes in that? Oh yes they will. But as scientists, we have to fight back and convince the community and society that certain things have to be done. Right now, they’re not being done, and people are dying.”

Yes, as one who practices geriatric medicine, Dorio knows well that pandemic or no, people eventually die. So, he says it is “important to make end-of-life decisions, like whether to be intubated and put on a ventilator” in advance so that any wishes, any questions are settled.

In addition, during this time for those with elderly relatives or friends, Dorio says we have a moral duty to reach out, make contact via the phone or things like FaceTime.

Dorio also believes that even as people continue to comply with stay-at-home protocols, it’s good stick to a routine — waking up at a decent time, changing out of pajamas — for one’s mental health.

For Dorio’s personal routine, every morning he checks his own temperature, blood pressure and oxygen level using a pulse oximeter, things he believes everyone should do.

For example, a pulse oximeter, which fits over one’s fingertip and should, in his opinion, be part of everyone’s personal health-care kit, can give one’s blood’s oxygen saturation level, which should be between 95 percent and 100 percent.

That way, if one has symptoms such as a cough or shortness of breath and a low oxygen level, one will know these are indicators that something might be wrong — or that one might have COVID-19 and need to take immediate steps for medical care.

“People around us will die. There’s no doubt in my mind. They will die. My hope is that we can minimize that by doing the right things. We should take everything we do right now and put that on our learning curve so the next time it happens, we’ll be able to save more people,” Dorio said. “That’s what I hope.”

In Santa Clarita, Dorio appears on KHTS-AM 1220 and FM 98.1 on “The Senior Hour” on Wednesdays at 11 a.m. His blog is at scvphysicianreport.com.